The Glass House Mountains are not easy climbs and it is important to be prepared so that you can have a safe and enjoyable visit. Take six minutes to watch this safety video. It could help save you from having to stay overnight or be rescued.

Discover more about the park’s plants by purchasing a copy of the ‘Ranger field guide: Native plants of Glass House Mountains National Park’. They can be purchased over the phone or by visiting a sales outlet. Photo credit: Maxime Coquard © Tourism and Events Queensland 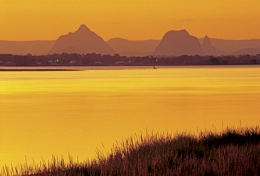 Mount Coonowrin, like other peaks of the Glass House Mountains, is an example of a volcanic plug. 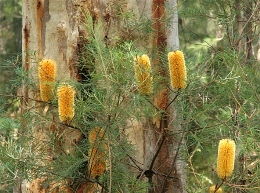 Candle-stick banksia in scribbly gum forest on the Tibrogargan circuit. From the day-use area, the vertical columns are clearly visible on Mount Beerwah. 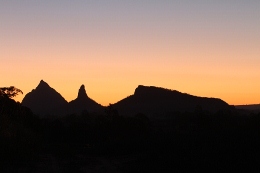 Image of the Glass House Mountains silhouetted against the setting sun, from Moreton Bay. Exotic pine plantations have surrounded the Glass House Mountains since the 1930s.

"These hills lay but a little way inland and not far from each other, they are very remarkable on account of there singlar form of elivation, which very much resemble glass houses which occasioned my giving them that name…"

The park has significant landscape and conservation values.

The peaks themselves protect montane heath—an uncommon community on the Queensland coast—while heathlands, forest and woodlands are found across the surrounding hills and plains.

These diverse areas, and particularly the rocky pavements of the peaks, are important for biodiversity, providing habitat for twenty plant species of conservation significance.

Discover more about the park’s plants by purchasing a copy of the Ranger Field guide: Native plants of Glass House Mountains National Park.

This area is home to koalas, goannas, echidnas and grey kangaroos.

Many birds such as kookaburras, cockatoos, lorikeets, rosellas and peregrine falcons can also be seen. The glossy black-cockatoo, which is considered vulnerable to extinction, is found in the Glass House Mountains area.

The Glass House Mountains are intrusive plugs—remnants of volcanic activity that occurred approximately 25–27 million years ago.

Molten rock filled small vents or intruded as bodies beneath the surface and solidified into hard rocks—trachyte and rhyolite.

Millions of years of erosion have removed the surrounding exteriors of the volcanic cones and softer sandstone rocks, leaving the magnificent landscape features you see today.

Interesting vertical columns that formed as the volcanic mountains cooled can be seen at Mount Beerwah and Mount Ngungun.

For the First Nations People, the Glass House Mountains area is considered spiritually significant with many ceremonial sites protected today. Before European settlement, the area was a special meeting place where many First Nations Peoples gathered for ceremonies and trading.

First Nations Peoples continue to 'read' environmental signs and know that certain events (such as a tree flowering) heralded another food supply. Before the land use changed, First Nations People planned large festivals and gatherings, such as bunya nut festivals, at times when local food sources were peaking. This way a crowd of hundreds of people could be catered for with minimal effort. Early missionaries in this area saw gatherings of thousands of people.

The bush here sustained people for tens of thousands of years. The Glass House Mountains area provided many resources from a varied and rich environment that included river systems, open forests, coastal wetlands and mountain forests.

During the 1860s, much changed for the First Nations People. Vast areas of timber were felled and burnt to make way for farming and stock. The railway from Caboolture to Landsborough, built in 1890, opened the way for more intensive settlement. As part of the Beerburrum soldier settlement scheme in the early 1900s, ex-servicemen and their families were allocated land and grew pineapples. However, many farms were unsuccessful and farmers turned to the timber industry to survive.

Beerwah has a long history in the timber industry. A substantial saw-milling town called Campbellville was established on the banks of Coochin Creek where timber was processed and floated downstream to Pumicestone Passage. Today the timber industry still provides timber from the exotic pine and native hardwood timber plantations.

The forest plantations in this area were planted in the early 1930s and are currently managed by HQPlantations Pty Ltd. The 'Tibrogargan' and 'Twins' forest management areas were re-planted in the 1980s and 1990s with Caribbean pine, slash pine, and a slash-Caribbean pine hybrid. Some of these commercial forests have been harvested in recent years.

Timber from these forests will be sold to local timber processors. Queensland's forest plantations are worth more than $1 billion per year and supply 85 percent of the timber used each year by Queensland's regionally-based timber industry.

Before harvesting forest plantations, foresters mark native timbers along watercourses as buffer strips so that they are preserved. These buffer strips protect water quality, prevent erosion and provide corridors for wildlife.