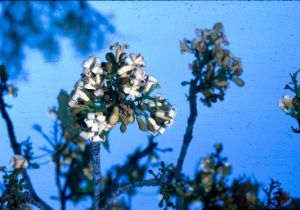 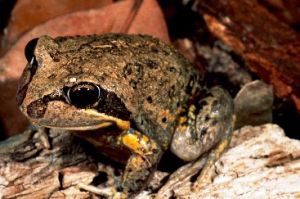 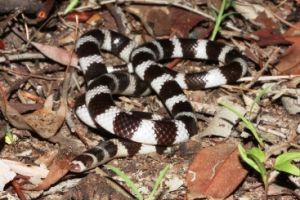 Forty Mile Scrub National Park is on the northern edge of the basaltic McBride Plateau. This plateau straddles the Great Dividing Range that separates the catchments of the Lynd River to the west and the Herbert River to the east.

Much of the park is covered by geologically recent basalt lava flows of the McBride Plateau. The face of one such flow can be seen parallel to the headwaters of the Lynd River. The basalt rocks have weathered and produced particularly fertile basalt soils that support the vegetation of the semi-evergreen vine-thicket. The fertile soil also helps the many semi-evergreen trees to quickly sprout new growth after dropping their leaves during the dry season. Different soils, derived from both granite and basalt rock types, support the eucalypt woodland communities.

Two major vegetation types are present in the park—eucalypt woodland and semi-evergreen vine-thicket.

The semi-evergreen vine-thicket, or dry rainforest, is quite different from the lush coastal rainforests. Although 'dry rainforest' sounds like a contradiction in terms, it actually reflects the extremes of rainfall experienced at Forty Mile Scrub National Park. During the wetter months from December to April, considerable rain falls in this area—situated at a higher altitude than the surrounding area, the Forty Mile Scrub receives more than its share. On the other hand, between May and November, the region receives very little rain. In order to survive these rainfall extremes many trees in the dry rainforest are semi-evergreen—they tend to drop their leaves when conditions are dry. Trees lose precious moisture through their leaves—dropping them allows the trees to reduce water loss at this critical time. Another difference from the coastal rainforests is the relatively dense shrub layer, with numerous vines threading their way through the other plants. Despite these differences, dry rainforests are still classified as rainforest because they share some common rainforest characteristics. Like coastal rainforests, dry rainforests have a closed canopy, contain typical rainforest plant forms such as vines and have few ground plants.

A walk in the vine-thicket will reveal examples of the white bean tree and various fig trees. Distinctive trees include broad-leaved bottle trees Brachychiton australis with massive trunks that serve to store water, and Burdekin plums Pleiogynium timorense that produce large edible fruits. The fruits of the white cedar tree Melia azedarach are toxic to humans, but attract large numbers of birds who are able to cope with the poison. This tree, which has a spreading, lacy crown, produces delicate mauve flowers in spring. The dry rainforest also contains the near threatened, white-flowered, onion vine Ipomoea saintronanensis.

Cypress pine, paperbarks, ironbarks and lemon-scented gum trees dominate the park's woodland. This woodland, which surrounds the vine-thicket, is adapted to fire and can survive periodic burning. Rainforest on the other hand, especially dry rainforest, can be badly damaged by severe fires. The isolated pockets of nationally significant semi-evergreen vine-thicket found in the area, have been protected to some extent by the surrounding woodlands and rocky outcrops.

The deep soil, diversity of plants and structural layers of vegetation within the park provide a wide variety of animals with a range of opportunities for food and shelter.

The basalt soils suit burrowing animals such as a frog known as the scarlet sided pobblebonk, the bandy-bandy snake and the world's largest cockroach.

The scarlet sided pobblebonk Limnodynastes terraereginae is a species of ground-dwelling, burrowing frog, native to eastern Queensland and north-east New South Wales. This highly distinctive, roundish frog is about 75 mm in length and has a dark grey, brown or black back. They have red-orange or scarlet markings on their sides and thighs, which gives this species their common name. Unlike most frogs, this pobblebonk has unwebbed fingers and toes that only have traces of webbing. They spend most of their time underground, but will surface during periods of high rainfall when you may hear the males making their high-pitched 'bonk' call.

Bandy-bandy snakes Vermicella annulata live in ant burrows and feed almost exclusively on blind snakes. They have a distinctive black-and-white pattern which they use to help them escape from predators. When threatened, these small snakes flatten and raise their body into loops creating an optical illusion. This serves to warn, and possibly confuse, any predators allowing the bandy-bandy to make its escape.

Growing to the size of a mouse (8 cm in length and weighing 20–30 g), Macropanesthia rhinoceros, the world's largest cockroach, lives in burrows up to 1 m below the ground. It feeds on dead leaves and plant material that it drags into its burrows, helping to further enrich the fertile soil. During the wet periods, large numbers of these giant cockroaches can be seen on the ground surface when their burrows are flooded.

Amongst the leaf litter lives a diverse collection of skinks including at least four types of rainbow skink. These little lizards may be seen during the day sunning themselves to get warm and active. They feed on insects and, if they find themselves threatened by a predator, can drop their tails. This acts as a distraction, and the tail can later be regrown.

On the forest floor, the red-legged pademelon Thylogale stigmatica browses on fallen fruit and leaves. It particularly likes crunchy leaves from the Burdekin plum and fig trees. Normally found living in rainforest further east, these little mammals are an isolated population. They are not found anywhere west of Forty Mile Scrub National Park. During the day they shelter in the vine thicket and then venture into the woodland to feed at dusk.

Butterflies can also be seen fluttering around the park. The most interesting is the four-barred swordtail Protographium leosthenes leosthenes. Forty Mile Scrub National Park is one of the few places this butterfly is easily seen each summer, especially near the toilets. It is white on the upper wings, with four brown-black bands and several blue and yellow spots. This butterfly is distinguished by its extended black wing tips. The adult four-barred swordtail only lives for about 2–3 weeks but it can survive for several years in its chrysalis stage.

Tree-dwelling animals are many and varied, and include mammals, reptiles and birds. The distinctive black-tailed monitor Varanus tristis lives on the lower trunks and branches of trees. Towards the canopy, common brushtail possums Trichosurus vulpecula sleep in hollows by day and emerge at night to dine on leaves and fruit. This possum has large pointy ears and a slightly bushy tail that it can curl around branches. From time to time, little red flying-foxes Pteropus scapulatus set up seasonal camps, roosting by day in the trees.

The European history of Forty Mile Scrub National Park is largely undocumented. It is known the area was previously used for grazing and timber extraction.

The park derives its name from the epic wagon journeys of the pioneering graziers who made reference to a variety of landmarks along the way. Not terribly imaginative, the Forty Mile Scrub is just that, 40 miles from Mount Garnet—the nearest post office and supply centre.

Ludwig Leichhardt, a German explorer and scientist who came to Australia to study its rocks and wildlife, passed this park on his epic journey across northern Australia. It was Leichhardt who named the Lynd River after John Lynd, a sponsor of his expedition.

Forty Mile Scrub National Park has been gazetted in a number of stages, starting in 1970, and currently has an area of about 6330ha. It was gazetted primarily to preserve the semi-evergreen vine-thicket—a type of vegetation of special significance.