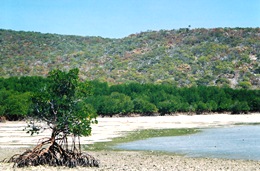 The islands have a varied landscape. The Flinders Group of islands is an extension of the mainland Bathurst Range, a ferricrete cap of Battlecamp Formation sandstone that was deposited about 120 million years ago when the region was below the sea.

The islands' varied landscapes include:

The islands support several distinct vegetation communities associated with the different landscapes. These include mixed eucalyptus and melaleuca woodlands with grassy shrubby understoreys typical of the mainland sandstone communities; closed mangrove forests featuring Avicennia spp. and Rhizophora spp.; and wind-sheared heath, grasslands and coastal vegetation such as pandanus and dwarf fan palms Livistona muelleri. The islands' woodlands and grasses have adapted to poor soils and have a short period of rapid growth during the wet season, resulting in a build up of fuel during the following dry season. Owen Channel also supports the highest diversity of seagrasses on the east coast of Queensland.

The islands support a diversity of fauna, dominated by specialist marine birds. The vulnerable beach stone-curlew is found here. The low number of terrestrial birds and mammals and absence of frogs probably reflects the limited availability of fresh water.

Other animals include reptiles typical of sandstone outcrops and associated woodland—snakes, geckos, sand monitors, macropods and native rodents. Many of the overhangs and caves support colonies of eastern horseshoe-bats Rhinolophus megaphyllus and the vulnerable coastal sheathtail bat Taphozous australis. The mangroves on the islands are used by colonies of black flying-fox Pteropus alecto. Estuarine and marine habitats support diverse fish, crustaceans and molluscs as well as estuarine crocodiles, dugongs and marine turtles.

Weeds include stinking passion flower Passiflora foetida and Mossman river grass Cenchrus echinatus. Feral animals such as goats Capra hircus and pigs Sus scrofa, introduced as food for shipwrecked sailors early this century, were subjected to a control program during the 1980s, and have now been eradicated from the islands.

The natural features of the Flinders Islands, Clack Island (PDF, 279.6KB) and the mainland are connected in a rich tapestry of stories and significant places. The island group is part of a cultural landscape that contributes to the identity of the Aboriginal Traditional Owners.

The islands contain physical evidence of Aboriginal occupation including rock art sites, occupation and burial sites, shell middens, stone arrangements, artefact scatters, story places and other significant places, sites and areas. The rock art on Stanley, Flinders and Clack islands is of international significance as all sites constitute an irreplaceable record of Aboriginal cultures in this region. Access is prohibited to some sites, such as Clack Island (PDF, 279.6KB) , due to the cultural significance of the island, while other sites, such as the Yindayin rock art site on Stanley Island, are open to the public.

Known European contact began with the wreck of the Frederick in 1881 on Cape Flinders, Stanley Island. Research and survey vessels visited over the following decades. The crew from HMS Dart left their mark carved into a rock in 1899 on Flinders Island.

From the late 19th century, European and Japanese vessels seeking beche-de-mer, pearls and trochus shell impacted on the local Aboriginal people. Men were coerced onto ships for labour and women were traded for goods. Some children were removed to missions by the government throughout the first half of the 20th century.

An army camp was established on Stanley Island during WWII. The island group was declared national park in 1939 and the channel was used as a transhipping station for Port Stewart.

The islands were protected by their remoteness until the 1970s, when the Owen Channel became a commercial centre for the northern trawl fishing industry. A commercial pearl mariculture farm operated from a lease in the channel. The number of touring vessels increased and a commercial seaplane operation regularly serviced vessels.

A short-lived national park base was established in the mid-1980s however all commercial activity in the channel ceased with the advent of mobile fuel barges. Today the islands are visited mostly by recreational vessels and increasing numbers of tourist vessels including large cruise ships carrying up to several hundred passengers.