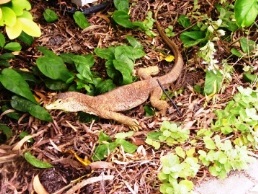 Yellow-spotted monitors are one of the largest predators on Fitzroy Island. 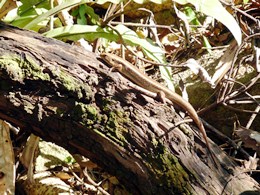 Major skinks are common along the Secret Garden track. Look for closed-litter rainbow skinks scurrying among the leaf litter or sunning themselves on rocks. 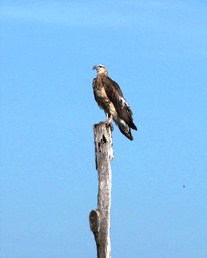 Ospreys can be seen soaring effortlessly above the island. The lighthouse was replaced by an automated light on Little Fitzroy Island in 1973.

The isolation of Fitzroy Island has led to an unusual situation—reptiles have become the predominant predators instead of mammals. The yellow-spotted monitor Varanus panoptes, one of the largest predators on the island at 1.2m long, hunts mammals, birds, eggs and lizards. Another reptile commonly seen on the island is the major skink Egernia frerei. This sleek, bronze-brown lizard can grow to 39cm long. Major skinks feed on insects and plants and can be found among large boulders and logs alongside the walking tracks. Many smaller skinks are also found on Fitzroy Island—look for the closed-litter rainbow skink Carlia longipes, a shiny, light-brown skink with black shoulders and red sides, scurrying among the leaf litter or sunning itself on a rock.

Several species of snakes occur on Fitzroy Island, but none are known to be dangerous to humans. You might see a carpet python Morelia spilota, spotted python Antaresia maculosa or slaty-grey snake Stegonotus cucullatus. Two species of tree snake—brown Boiga irregularis and northern Dendrelaphis calligastra—are also common on the island.

Pied imperial-pigeon Ducula bicolor migrate from New Guinea to nest and feed in the rainforest during the summer fruiting season.

Another migrant, the buff-breasted paradise-kingfisher Tanysiptera sylvia, arrives in early November for the summer. It can be seen feeding on small lizards and snails that it catches by pouncing from a perch in mid-level branches in the rainforest.

Flashing white against the green of the forest, sulphur-crested cockatoos Cacatua galerita feedson forest seeds, nuts and fruits. Raucous screeches ring out across the forest as sentinels birds warn the feeding flock of intruders.

Large mounds of decaying leaf litter and soil found in the forest may be the handiwork of orange-footed scrubfowls Megapodius reinwardt, a brown, ground-dwelling bird the size of a chicken. The mound is built by a breeding pair to provide a warm, safe nest for incubating their eggs. By day scrubfowls may be seen scratching around in the leaf litter on the forest floor for food such as fallen fruits, seeds, insects and snails.

Ospreys Pandion haliaetus can be seen soaring effortlessly above the island with their typical flap-flap-flap-glide motion. The glide can suddenly become a swoop as the osprey dives into the water, emerging with a fish gripped in its sharp talons.

A variety of plant communities can be found on Fitzroy Island. Heaths and open woodlands of eucalypt, acacia and turpentine trees cover the exposed slopes and spurs on the island. Rainforest grows in the damp valleys and mangroves line the creeks. Coastal plants tolerant of salt spray and low nutrients, such as casuarinas and pandanus palms, fringe the beaches.

The making of an island

Part of the granite mountain chain along the coast, the island was once connected to the mainland by a grassy plain. This was submerged as the sea level rose some 6000 years ago and the mountain we know as Fitzroy became an island.

In 1770, Lieutenant (later Captain) James Cook named the island Fitzroy after the family name of the Duke of Grafton, who was Prime Minister of England at the time the HMB Endeavour sailed. The point on the mainland opposite (Djilibiri) was also named Cape Grafton in his honour.

From the early 1800s Fitzroy Island was visited by pearling and surveying vessels irregularly until, in the late 1800s, a beche-de-mer (sea cucumber) industry operated from the island. Sea cucumbers were collected and prepared for the Asian food market.

In 1876, a quarantine station was established on Fitzroy Island for Chinese 'coolies' en route to the Palmer River Goldfields. Conditions were poor and starvation, sickness and death were common. Many coolies were buried on the island but the location of most of the graves is unknown.

In the early 1900s Fitzroy Island became part of the Anglican Aboriginal mission established at Yarrabah and was used to grow bananas, pawpaw, potatoes and cassava. Memories of family separations, attempted runaways, farming the island’s vegetable gardens and attending the coral church are kept alive by the old people of Yarrabah today. The Menmuny Museum at Yarrabah contains displays about the island’s mission days.

The lighthouse on the main island today stands on what was once the site of a radar station, established in 1942. The Number 28 Radar Station, along with coastal artillery gun emplacements on Cape Grafton, served to protect Grafton Passage. Both were disbanded and removed at the end of the World War II.

The lighthouse and lighthouse cottages are part of the national park.