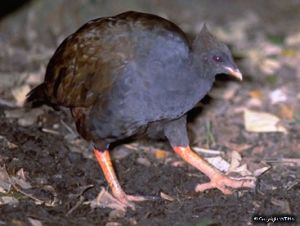 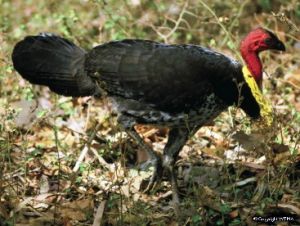 Over 100 species of birds have been recorded on Dunk Island. Easily seen in the forests are the large mound-builders—orange-footed scrubfowl and black Australian brush-turkeys that incubate their eggs in mounds of rotting vegetation. These contrast with tiny olive-backed sunbirds which feast on the nectar of flowers. Secretive emerald doves, with their brown heads and emerald green wings, forage for fruit on the forest floor. Large, majestic ospreys, with their distinctive white heads and chests and dark brown backs, fly above the sea looking for fish below.

The islands are also home to several rare or vulnerable seabirds. Just off-shore from Dunk Island is Purtaboi Island—a refuge for thousands of seabirds. During the summer months, the island becomes a creche as seabirds such as terns and noddies breed. Most seabirds nest in the sand or in low bushes. Lesser crested terns and bridled terns nest in a scrape in the sand while common noddies nest on an untidy shallow pile of seaweed, twigs and grass. Such nesting behaviour makes them vulnerable to predators such as pigs, dogs, goats and people. The lack of mainland predators, along with a plentiful supply of fish and small invertebrates from the surrounding reef waters, make islands such as Mound (Purtaboi) important seabird breeding sites.

Many species of reptiles are also found on Dunk Island, including harmless pythons and tree snakes as well as saw-shelled turtles in freshwater creeks. There are also monitors, geckos and skinks. The island's few mammals—the fawn-footed melomys (small native rodents) and several species of bats and flying-foxes—are seen or heard mostly at night. Dunk Island's best-known insects are the Ulysses butterflies. Metallic blue and black wings make these beautiful butterflies impossible to miss against the rainforest backdrop. Green and black Cairns birdwing butterflies are also present on Dunk Island. Fish are present in the freshwater creeks on Dunk Island. Jungle perch, rainbow fish, Pacific blue-eye, snakehead gudgeon, speckled and spot-finned gobies, and long finned eels may be seen.

Proximity of creeks, rainforests, eucalypt forests, rocky shore, reef flat and mangroves provides an ideal situation for nature watching and allows insight into the importance of these island national parks as wildlife refuges.

Life in the surrounding reef waters is just as fascinating as that seen on the islands. Sea turtles and dugongs can sometimes be observed feeding in shallow water seagrass meadows between the islands. Closer to shore, mangrove communities and extensive intertidal areas provide feeding grounds for many seabirds. The fringing reefs are home to a diverse array of marine life such as corals, fish, shellfish and crabs.

The Family Islands are continental islands composed mostly of granite. Before the last sea level rise began 8000 years ago they were part of the mainland. Prevailing winds and currents have formed sand spits on the north-western sides of most of the islands. From the sea, the Family Islands appear to be cloaked in a mosaic of lush green vegetation. Vegetation is influenced by the prevailing winds and rainfall.

Dunk Island supports a mosaic of rainforest (mostly complex mesophyll vine forest) in gullies and on the wetter slopes. On the drier exposed ridges, there are relatively open transitional forests with eucalypt emergents and rainforest understorey including many palms and thick, looping, coiled lianas. The boundary between forest types is never distinct. Mangrove communities are present on the south side of the island where there is protection from the prevailing winds. An area of wind-sheared heath is present on the north-eastern headland of the island. Mung-Um-Gnackum and Kumboola islands support rainforest and transitional forests with eucalypt emergents. Fringing communities also support mangrove and pandanus species.

On Wheeler, Coombe, Smith, Bowden and Hudson islands, stunted woodlands of casuarinas, wattles and eucalypts grow between tumbled slabs of granite on the windswept south-eastern sides of the islands. Lush rainforests are home to species such as figs, palms, milky pines and satin ash trees that grow on the sheltered northern sides. The southern Family Islands support rainforest species, including the rare palm, Arenga australasica.

Cyclone Yasi passed overhead around midnight on 2 February 2011. Winds gusted at 285km/hr and high rainfall was experienced in the immediate aftermath. The Family Group islands bore the brunt of the storm, with buildings wrecked and trees stripped of leaves and limbs.

Tropical cyclones are a natural part of the dynamics of this landscape and the rainforest is quick to recover. Bare and broken limbs are soon clad in new growth and pioneer species spring to life from the forest floor to fill the gaps in the canopy. Although the impacts of Cyclone Yasi will be evident for many years to come, the forests on Dunk Island and the other Family Islands are changing day by day as they recover.

Dunk Island, known as Coonanglebah, is traditionally shared between Bandjin, saltwater people whose sea country extends down to Hinchinbrook Island, and Djiru, mainland people from the coastal area around Mission Beach. They have lived in this area for tens of thousands of years. Before the sea level rise began about 8000 years ago, what today is reef was a coastal plain known to the Aboriginal inhabitants as 'eastern grey (kangaroo) country'. After the sea level rise, the plain was submerged and hills on the plain became the Family Islands. Aboriginal people then paddled to the islands in bark canoes, making use of the strong tidal currents to collect, hunt and gather the islands' rich resources for food and materials. Where rivers once coursed across the coastal plain, today they run under the seabed and, in places, fresh water wells up into the sea water. Knowledge of these sites is passed on through traditional stories. Today, paintings in rock shelters—images of turtles, birds, echidnas and fish—and shell middens provide tangible evidence of the Aboriginal peoples' long association with the island. Despite the many changes since European settlement, the Djiru and Bandjin peoples still retain a strong connection to Dunk Island and take part in its management. An important creation story for the island is that of Girroo Gurrull, an Aboriginal ancestral spirit, part man but mostly eel, who named islands and local waters in his travels.

Dunk Island remained undiscovered by Europeans until 8 June 1770 when Lieutenant James Cook sailed the Endeavour past the Family Islands during his voyage of exploration of Australia's east coast. He named only one island, Dunk, after Lord Montague Dunk—the Earl of Sandwich and the first lord of the British Admiralty. During the 1800s Europeans settled the nearby mainland, seeking gold, timber and grazing land. Edmund J. Banfield and his wife Bertha were the first European settlers on Dunk Island. They lived here from 1897 until Edmund's death in 1923. 'Confessions of a Beachcomber' was published in 1908. The book became a celebrated text for romantics and escapists and established Dunk Island's reputation as an idyllic island paradise.

World War II affected Dunk Island, as it did many other parts of Australia. Dunk Island was part of a network of surveillance points along Australia's east coast. The airstrip was built in 1941 and, in 1942, the No. 27 Radar Station (RS) Dunk Island was built by the Royal Australian Air Force on the highest point on the island, Mount Kootaloo. 27RS was a light-weight air warning (LW/AW) radar, powered by two large diesel generators in bunkers partly below ground. It provided constant surveillance of the coast at a time when the Japanese were a formidable force in the south-west Pacific. Banfield's original bungalow had been previously developed into the island's first resort. During the war the resort became the living quarters for the men staffing the radar station. They forged the track to the top of Mount Kootaloo to install, and then operate, the radar equipment. Walking the track was not permitted at night so the men climbed the track during the day and slept in a tent next to the radar until the midnight shift changeover. The station was dismantled when the war ended in 1945. Today all that can be seen are the rusty remains of the turning mechanism for the air warning aerial.

After the war tourism once again became an important use of the Family Islands, as it did on many of Queensland's islands. Today the Family Islands offer a variety of experiences ranging from Dunk Island's challenging walks and excellent nature viewing to the tranquil pleasures of sailing or boating around the island group and relaxing on the other islands' many beaches.