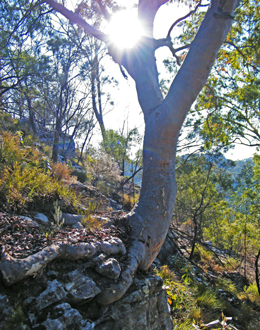 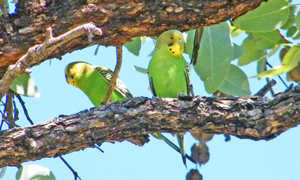 The stencilled images on sandstone within Expedition National Park are a reminder of the rich social and spiritual life of the region's original people. 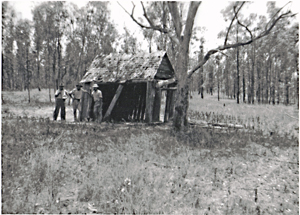 The distinctive landscapes of Expedition National Park are the result of a long and turbulent geological history. The oldest rocks in the area are formed from sediment laid down long ago in two great depressions—the Surat and Bowen Basins.

Between 240–235 million years ago mudstones, siltstones and other fine-grained sediments were swept by rivers into the Bowen Basin. Following this, streams from the north and north-west deposited thick beds (up to 240 metres in depth) of quartz sand across much of the Basin.

About 200 million years ago the rock layers were greatly folded and tilted, and the Surat Basin gradually sank. Major rivers deposited vast amounts of course quartz sand from the west and north-west into sandbars up to 100 metres in depth. This sand became the white Precipice Sandstone—which forms the area's many cliffs. This was the time of the dinosaurs, but few traces of them remain here, as the sandbanks of the rivers did not allow bones or footprints to be preserved.

After millions of years of uplift and erosion, the sandstones remain today as towering white cliffs and gorges.

The brigalow belt is a biological region (bioregion) that covers much of central Queensland and northern New South Wales. The national parks of this area fall within the brigalow belt.

Named after brigalow Acacia harpophylla, a plant that once covered much of the area, this bioregion is a complex mosaic of different vegetation communities.

Many of the bioregion's plant communities are classed as 'threatened', due to clearing, altered fire regimes and the effects of introduced species. As only just over two percent of the brigalow belt bioregion is conserved within national parks and other protected areas, national parks play a key role in conserving the area's original vegetation communities.

These plant communities provide homes for a huge range of animal species. Many of these species are either rare, living here in isolated populations or at the westernmost limit of their distribution.

Time for a park

Today, this national park conserves a mosaic of contrasting plant communities, including softwood scrub, brigalow and eucalypt woodland. A diverse collection of native plants and animals, many classed as rare and threatened, are found here.

Stories in the stone

This is a place rich in human history. The Iman Aboriginal People lived here for many thousands of years. Images stencilled on the sandstone throughout the area are a reminder of the Iman People's long connection with this land.

More than just decorative art, the images stencilled, painted and engraved on sandstone were a form of communication. Rock imagery has symbolic meaning and purpose, and is often found at sites where important and sacred rituals were preformed—this 'art' expresses a spiritual connection to the land.

In 1844 explorer Ludwig Leichhardt travelled through this area on his way from the Darling Downs to Port Essington near Darwin in the Northern Territory. Leichhardt named many features, including Robinson Creek, after expedition members and supporters.

With the arrival of settlers soon after, decades of conflict began as the Iman strove to keep their lands from the new arrivals. However, by 1920 the conflict and European diseases had taken their toll and remaining Aboriginal people were forcibly removed to distant 'reserves'.

Formed in 1852, Glenhaughton sheep station covered all of the area now included within Expedition National Park and surrounding State forest areas. The station at one stage employed 52 shepherds, each responsible for 1400 sheep. Spear-grass, dingoes, and the provision of more watering points saw sheep replaced by cattle in the late 1890s.