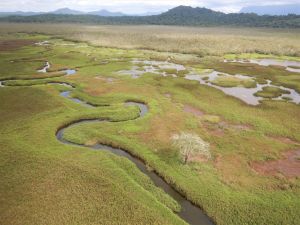 Eubenangee Swamp National Park is the last remaining example of a high rainfall wetland occurring on nutrient-rich basaltic alluvium. It is a prime remnant of the extensive systems that occurred, pre-clearing, throughout the flood plains of the Wet Tropics bioregion. Part of the Russell River catchment, the wetlands are situated on an old alignment of the Russell River and fall within the highest rainfall zone in Australia. The nearby uplands of the Bellenden Ker Range have an average annual rainfall of 8313mm, while the lowlands around Eubenangee average 4001mm.

The underlying rich basalt soils support vegetation communities that differ from other wetlands in the region and the park contains some rare plants such as Fimbristylis adjuncta, an endangered sedge, and the most southern known extent of the carnivorous swamp pitcher plant Nepenthes mirabilis.

Drainage and soil patterns determine the swamp’s complex environment. Paperbark (melaleuca) trees and sedges thrive in the wetlands, while in the better-drained areas, rainforest fringes endangered grasslands. This diversity of vegetation types attracts a variety of birds.

Over 200 species of birds have been recorded here. The grassy hill, accessed via the walking track, makes a good vantage point for observing waterbirds such as ducks, herons, cormorants, egrets, ibis and spoonbills. Impressive black-necked storks (jabirus) nest in the park every year. Migratory waders such as sandpipers, dotterels and godwits also visit this busy wetland in the summer months and various birds of prey, such as black kites and white bellied sea eagles, circle overhead.

When in flower, the paperbark trees attract large numbers of honeyeaters and other nectar-feeding birds. Fairy-wrens and crimson finches can be seen in the grasslands. Orioles, flycatchers and kingfishers can be seen along the waterways and in the forest. Different types of kingfisher include the forest, azure, little and sacred, as well as the larger laughing kookaburra. Channel-billed cuckoos appear in the warmer months of the wet season, migrating from New Guinea and Indonesia to breed.

The diversity of birds and wetland habitats is internationally recognised. The park also forms part of an important cassowary corridor that links coastal and hinterland areas and is a significant fish and crustacean nursery.

It is sometimes possible to see turtles and estuarine crocodiles that inhabit the Alice River and wetlands.

When disturbed, wetlands are highly susceptible to invasion by pest plants (weeds). The national park lies within an agricultural landscape and has been heavily disturbed by former land users. Pond apple (Annona glabra), a weed of national significance, is being strategically treated within the park. The Russell River has been badly infested with this plant, introduced from tropical America. It is particularly destructive in paperbark swamps where it can form a dense understorey that prevents young paperbark trees from developing.

Fire is an important part of maintaining the existing wetland system. The grass, sedge and paperbark areas need fire to survive. Ongoing prescribed burning programs, initiated by QPWS in 1984, have been successful in re-establishing diverse native sedgeland and grassland communities. Prescribed burns help to control the invasion of non-native plants, particularly pond apple. Low intensity fire destroys pond apple trees, but does not kill the paperbarks as they are a fire adapted species. These programs also reduce the risk of more damaging, uncontrolled fires. Bushfires can ignite the peat soils of the swamp and these fires can burn for weeks.

Prior to becoming a national park, much of this area was used for rice and sugar cane production and cattle grazing. There was also a horse-racing track. A number of drains associated with these past land uses were built but, since the area’s protection as a national park, most of these have been blocked and water is now retained within the swamp.

In 2002 the Queensland Government added a crucial section of land to Eubenangee Swamp National Park—a 180ha block along the north edge of the park including Dinner Creek, one of the swamp’s most important water sources. Prior to this, much of the water from Dinner Creek was channelled away from the swamp and into the Alice River, reducing water levels in the wetlands. With the health of the wetlands deteriorating and future rainfall levels uncertain, due to our changing climate, securing the swamp’s water source is vital, so a weir was constructed to recapture the water. With the water returned, the wetlands are now thriving.

In addition to re-establishing water flows to the swamp, the supplementary section of national park links remnants of native vegetation including paperbarks, reeds and sedges to similar communities in the existing national park. This extends and protects important habitat linkages for birds such as the endangered Southern Cassowary and also allows local staff to manage more of the whole wetland system. The degraded grasslands of the park are being restored and native vegetation is being planted. Seeds are collected from the park and taken to the nursery managed by the Restoration Services Unit at Lake Eacham. QPWS staff, with the help of volunteers and community groups, raise and care for the seedlings, which are then returned to the park and planted in revegetation areas.