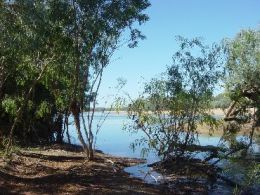 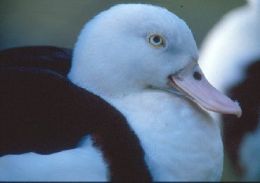 Along the Mitchell River, the lush, green canopy stands out against the surrounding open savanna. Formed from river silts and loams deposited during floods, this fertile strip of land can vary from a few hundred metres to several kilometres wide.

Gums, milky pines and cabbage tree palms tower over the river, thriving in the rich, dark soils. Spangled drongos sit motionless in the trees, a shoulder shrug or a flick of the tail their only movement. Then suddenly they dash into the air, chasing insects for their next meal. Wompoo fruit-doves, Australasian figbirds and common bronzewings also perch above the Mitchell River.

The river runs all year, with many long, deep waterholes abundant with fish and other aquatic life such as freshwater and estuarine crocodiles. Sevenspot archerfish are common and can be seen cruising in the gentle flow near the river’s banks, looking for insects above the water. Once spotted, archerfish shoot a jet of water at the insects, knocking them into the water before eating them. Blue catfish, sooty grunter, sawfish and freshwater sole are also residents of the Mitchell River.

Channels form islands and lagoons within the river, which provide habitat for a diverse range of wildlife such as black-necked storks (jabiru), brolgas and radjah shelducks.

River frontage along the Alice also varies from a few hundred metres to several kilometres wide. Differing from the Mitchell River, the soils of the Alice River are characterised by whitish coloured sands and clays.

Bloodwoods, ti-trees and Cooktown ironwoods line the banks of the Alice River, their thick canopy creating a cool retreat for agile wallabies and black-tailed monitors. This riparian vegetation is interspersed by open forest—areas of natural salinity dominated by ti-trees, wattles and tough native grasses such as wiregrass and firegrass. In some areas the ti-trees and wattles form dense thickets, preventing grasses from growing. These thickets are fire-sheltered sanctuaries for a variety of ground dwelling birds such as bush stone-curlews, pigeons, quails and bower birds. 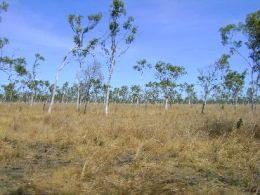 Savanna country—the area in between the Mitchell and Alice river frontages—is the third and largest landscape type. Two major creeks run through this landscape. Middle Creek, appropriately named as it flows through the centre of the park, and Mimosa Creek.

This flood-prone area is mostly light-coloured alluvial clay, with the ground becoming hard and cracked during the dry months. Box and bloodwood trees with speargrass in the understory dominate this open forest. Emus strut through the grass while eastern grey kangaroos rest under shady trees. High above, hawks and eagles search for their next meal. Often heard before they are seen, flocks of galahs screech as they fly swiftly past, heading for the closest watering hole. Australian bustards rest unseen in the tall grasses during the day. As evening approaches they hunt for dinner. Walking stately with their bills aloof, they search for insects, lizards and rodents in the grass.

After the wet season both Middle and Mimosa creeks flow for several months, later drying into a string of shallow, clay waterholes ranging in size from a few square metres to several hectares. Coolabah, ti-tree and northern brown birch thickets grow in and around the waterholes. Waterbirds are abundant around the larger lagoons which hold water throughout the year, creating a haven for wildlife during the dry season.

Black-necked storks (jabiru) stride through waterholes, sweeping their partly-open bills through the water searching for food. These striking, tall, black and white birds are often seen chasing fish, running after them with their wings raised. In contrast, tall, silver-grey brolgas wade quietly through the shallows, plunging their heads underwater to dig for roots. The Uw Oykangand people (the language group of the ‘people of the outside waterholes’), are the Traditional Owners of Errk Oykangand National Park (CYPAL).

Not only is this bountiful landscape important to the Uw Oykangand people for hunting and fishing, but it holds great spiritual significance. Today, this country remains a place where they pass on their culture and history to future generations.

Alec and Frank Jardine were the first Europeans to set foot in what is now Errk Oykangand National Park (CYPAL) in December 1864. The Jardine party, consisting of six white men, four Aboriginal people, 42 horses and 250 head of cattle, were on their way from Rockhampton to the tip of Cape York Peninsula. Alec and Frank Jardine’s father was the resident magistrate at Somerset, an outpost settlement, and they wanted to establish a cattle station near there.

They travelled along the west coast of the peninsula, enduring extreme hardships as they reached the lower-peninsula country at the beginning of the wet season. Numerous confrontations with Aboriginal people took place during their journey, including the ‘Massacre of the Mitchell River’ just a few kilometres from the park boundary. More than 50 Aboriginal people were killed and many more wounded.

Before becoming national park, Koolatah Station held a pastoral lease over the area. Maddock Hughes and his brothers took up the Koolatah holding in 1912 and forged a viable grazing business. The first cattle were thought to have come from Delta Downs Station near Karumba, in exchange for horses.

Crocodiles were also harvested commercially in the area from the mid 1900s until they were protected in 1972.