Be inspired: Grab your boots and adventure outdoors—7 short walks around Cairns and Townsville

‘These boots are made for walkin’ and that’s just what they’ll do…’ If you like the sound of rambling through ancient rainforests, wandering along palm-fringed beaches and clambering around tropical islands, not to mention, spotting awesome wildlife, read on! Photo credit: Maxime Coquard © Queensland Government 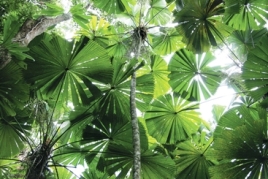 Part of Djiru National Park lies within the Wet Tropics World Heritage Area. Proclaimed in 1988 the area is almost 900,000 ha and extends for about 450 km between Cooktown and Townsville. The area's vegetation is primarily tropical rainforest, but also includes open eucalypt forest, wetlands and mangrove forests. The area meets all four natural criteria for World Heritage listing. These criteria recognise the area's exceptional natural beauty and the importance of its biological diversity and evolutionary history, including habitats for numerous threatened species. The area also has cultural significance to Aboriginal people who have traditional links with the area and its surrounds.

The forest and the trees

A number of unusual palms are found in this area. One of the most picturesque is the native fan palm Licuala ramsayi that grows in colonies, thriving in wet lowlands where drainage is often poor. Growing slowly, these trees reach heights of 10–15 m on single trunks topped with clustered crowns of circular, pleated leaves. Up to 2 m in diameter, these fronds split into segments. The licuala forest in Djiru National Park is one of the few remaining fan palm forests left in the lowlands of North Queensland.

The endemic arenga palm Arenga australasica is considered vulnerable to extinction, and grows only in coastal areas and adjacent islands in this part of Queensland and in the Northern Territory. It produces clumps of slender trunks, up to 20 m in height, each of which dies after flowering and fruiting. Ulysses butterflies add a splash of colour to the rainforest. 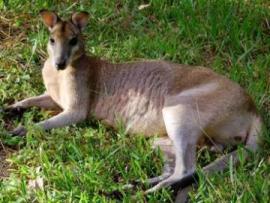 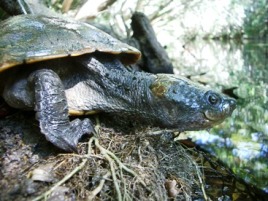 Saw-shelled turtles can be seen in Lacey Creek.

Agile wallabies Macropus agilis, the most common member of the macropod family in tropical coastal Australia, may be seen grazing in open areas in the late afternoon, when they emerge from their daytime resting places in dense vegetation. Darker swamp wallabies Wallabia bicolour may also be encountered in thick forest undergrowth. Instead of grazing on grass, they prefer to browse on coarse shrubs and bushes.

Most butterflies need specific plants as food for their caterpillars. The great variety of potential food plants in these forests means that visitors are likely to see many types of butterflies. The electric-blue wings of the wonderful Ulysses butterfly Papilio ulysses are an eye-catching sight as it zigzags through the canopy.

During winter, a number of Wet Tropics' butterflies move to the coast and sheltered areas along creeks, where they congregate in clusters of hundreds or even thousands for three months or more, waiting for temperatures to rise and new leaves to appear on larval food plants.

In rainforest waterways you may spot an active and inquisitive fish, the jungle perch Kuhlia rupestris. It has distinctive dark blotches on upper and lower lobes of the tail—hence its other name, flagtail. Saw-shelled turtles Wollumbinia latisternum are also found in these rivers. These turtles are among the few native animals able to eat introduced and toxic cane toads without ill effects.

Look out also for the giant petalurid dragonfly Petalura ingentissima, one of the world's largest. It has a large black body and transparent wings with a span of 16 cm. Lovely black and blue damselflies are also a common sight flitting around the sunlit sections of streams.

Lace monitors Varanus varius are large lizards—Australia's second largest—which can grow to over 2 m in length. They frequent picnic areas, scavenging for scraps, but please do not feed them. The females deposit their eggs inside termite mounds, letting the termites seal up the entrance again. The temperature inside the mounds is high and stable—perfect for incubation.

Five species of kingfishers can be seen in the area, including the spectacular buff-breasted paradise-kingfisher that has an 18 cm-long white tail. It is a seasonal visitor, migrating from New Guinea in summer to build its nest in terrestrial termite mounds. Cassowaries disappear into the rainforest backdrop of the Licuala day-use area.

Djiru National Park is one of the few places where visitors are likely to see an unusual and endangered bird—the southern cassowary Casuarius casuarius johnsonii. It has disappeared from most of its former range but high densities still inhabit the relatively small Mission Beach area.

This flightless bird is Australia's largest rainforest animal. Females, which are larger than males, can reach 2 m—taller than the average human—when they stretch up to their full height. The birds stride through the forest feeding mainly on fallen fruits which are later deposited, partially digested, in prominent piles—look out for these signs that the birds are around. It is estimated that over 140 plant species depend on these big birds to disperse their seeds which pass unharmed through the digestive system.

Male cassowaries are the caregivers, sitting on the eggs for about 50 days until they hatch and then looking after the chicks for about nine months.

The Aboriginal Traditional Owners of this area have a spiritual link with the land which involves maintenance of rights and responsibilities for use and care for their country and its resources.

The Djiru Aboriginal people are the Traditional Owners of the area around Mission Beach. Djiru National Park is a significant cultural area and was an important hunting and foraging area. Bingil Bay, to the east, was a traditional camp site meaning ‘a good camping ground with fresh water’. Cone-shaped shelters (mijas) were constructed using lawyer cane or saplings covered with bark and palm fronds.

The Djiru traditionally hunted and gathered food from the sea and neighbouring islands using bark canoes and outriggers to catch sharks, dugongs, turtles and fish. Birds' eggs, shellfish and crayfish were collected from nearby islands.

The Hull River Aboriginal settlement (a government settlement, not a mission) was set up in the early 20th century at South Mission Beach but was abandoned after it was destroyed by a cyclone in 1918 and the people moved south to Palm Island.

The many creeks and rivers were a source of aquatic food such as crustaceans, fish and turtles. The bark of the milky pine tree, when thrown into the water, interferes with the ability of fish to breathe and was used traditionally to easily catch freshwater fish and eels. Black bean and cycad seeds were gathered from the rainforest and the toxins removed through a complex system of detoxification.

Known European exploration of the area began in 1848 when Edmund Kennedy landed at Kennedy Bay on board the Tam O'Shanter. He then travelled south to present-day Cardwell and Edmund Kennedy, Girramay National Park, to set off on his Cape York Peninsula overland expedition.

The first permanent European residents of Mission Beach were the Cutten brothers who arrived on 1 April 1882. They developed one of the first major agricultural ventures in North Queensland, growing bananas, coffee, tea, sugar, tobacco, coconuts, citrus and pineapples in the fertile valleys and foothills around Bingil Bay. They established a settlement there, just north of present-day Mission Beach.