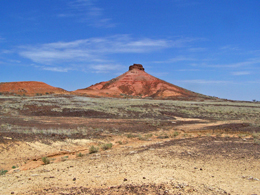 Sandstone mesas are a special feature at Diamantina National Park. 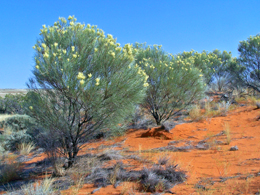 Sandhill grevilleas are perfectly adapted to the sandy soils in Diamantina National Park.

Formed over millions of years from ancient sediments, the variable landscape of Diamantina boasts many different ecosystems. Sandstone mesas, sand dunes, claypans, gibber plains and river channels each support a diverse and distinctive community of plants and animals that are especially adapted to local soils and microclimates.

A number of vulnerable and endangered species including bilbies, kowaris, and two ground dwelling birds—the plains wanderer and elusive night parrot—find refuge in this park. Threatened by predators and livestock grazing, bilbies in Queensland are now restricted to a few populations in the Channel country.

Many plant and animal populations in Diamantina fluctuate with the seasons, which are characterised by long periods of dry weather, and short torrential downpours that result in widespread flooding. Inland taipans and birds of prey feast on native long-haired rats that breed quickly after rain, and desert plants explode into a colourful kaleidoscope of flowers.

River channels, ephemeral wetlands and permanent water bodies throughout the park attract spectacular flocks of waterbirds, while nearby coolibahs, river cooba and gidgee provide food and shelter for screeching bands of budgerigars, corellas and galahs.

Lake Constance and Hunters Gorge—two wetlands of national significance—are protected for the resident and migratory birds that breed there.

A core part of Western Queensland, the watercourses, ranges and plains of Diamantina National Park supported the Maiawali people for many generations.

Following the seasons to where food and fresh water were plentiful, families moved through every part of this landscape, maintaining close physical and spiritual connections to country. The Diamantina River provided a natural route for trade, a network of tracks running north-south was a commerce road where people exchanged a wide variety of traditional (and later) contemporary items.

Shortly after, a thriving cattle industry developed in the region, and Diamantina Lakes Station was established as a cattle property in 1875. Running up to 12,000 head of cattle in good times, the property was prized as prime fattening country by the station’s many owners. Purchased in 1992 by the Queensland Government, the property was subsequently gazetted as a national park, although a number of stock routes still pass through it and are used regularly.