Be inspired: Coastal camping at Deepwater is our best-kept secret!

Everybody loves a secret, right? Well, we have a beauty! Just over an hour north of Bundaberg on Queensland’s central coast there’s a little-known place, Deepwater National Park, that’s perfect for a short break or weekend getaway for the whole family. Photo credit: Paul Curtis © North Queensland Wildscapes

Many people come to Deepwater National Park to enjoy the beach and fishing in a quiet, unspoilt area, but there is more to Deepwater than meets the eye. Take some time out to discover this interesting and important coastal park.

Paperbark forests, low shrubland dominated by wallum banksias and open heathlands grow on sandy soils to the west of the central access track. These taper into swamps on either side of Deepwater Creek. The tannin-stained creek is fringed by tall forests of swamp mahogany, paperbark and cabbage palms, and it is broken in places by shallow sections of reed bed and paperbark forest. It is only during the wet season that water flows in these areas.

Behind the beach, frontal dunes are vulnerable to erosion. Stunted, twisted shrubs and creepers help keep sand from being blown away. Wind-sheared thickets on the higher parts of the dune show the strength and direction of the prevailing winds.

In the lee of the dunes are patches of vine forest with banksias, weeping cabbage palms, Burdekin plums and rainforest species festooned with vines. Further inland are beautiful open forests of wattles, banksias, Moreton Bay ashes, pink bloodwoods and a range of other trees and shrubs. Near the park's southern boundary is an area of rainforest.

Birds are the most visible and vocal of the wildlife, as they take advantage of the park's abundant food sources and habitats. See emus strolling across the plains or honeyeaters feeding in golden banksia flowers; hear the screeching call of red-tailed black-cockatoos; photograph brahminy kites soaring above the beaches, and count the numerous waterbirds feeding among the swamps.

Other wildlife includes grey kangaroos, swamp wallabies, bandicoots, echidnas and many small native rodents such as water and swamp rats, melomys and delicate mice. Snakes and lizards are occasionally seen, but should be admired from a safe distance. Mammals are often more difficult to see. At night, sugar gliders, greater gliders and ringtail possums frequent tall Moreton Bay ashes and pink bloodwoods to nest and feed. 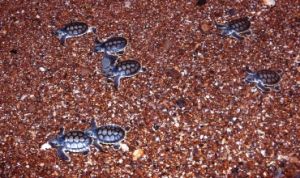 Turtle hatchlings racing to the sea.

From November to March, visitors to Deepwater can witness one of nature's most fascinating spectacles—the annual pilgrimage of sea turtles. Each year, adult loggerhead, flatback and green turtles come ashore to lay eggs on Deepwater's beach. About eight weeks later, young sea turtles emerge from the eggs and race to the sea.

The best time to see turtles laying eggs is after dark from mid-November to February. If you visit in January you might be lucky enough to see both adults and hatchlings. Hatchlings usually leave their nests to begin their journey to the sea at night from mid-January until late March. This is a fascinating sight, but you must watch quietly and never handle the hatchlings. These endangered marine animals are struggling to survive and handling the hatchlings could cause them to die. Avoid standing on the nest as you may push onto turtles below the surface and suffocate them.

The coast and hinterland are rich in cultural history and are part of the Gooreng Gooreng Aboriginal people’s traditional country.

Deepwater was gazetted as a national park in 1988, protecting 4,090ha of undisturbed coastal freshwater ecosystems remaining on the Wide Bay coastline. In 1994 Round Hill National Park (gazetted in 1979) was included in Deepwater National Park and Deepwater Conservation Park was added in 2001, increasing the park's total area to 4,730ha.