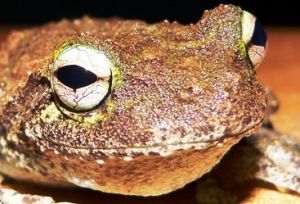 The diverse vegetation of Davies Creek National Park is mirrored by the wide variety of wildlife recorded in, and immediately adjoining, the park. Some significant invertebrates are commonly found in the park. These include one of the world's largest dragonflies (a dinosaur of the dragonfly world) and some of the world's largest bird-eating and barking spiders, measuring to about 16 cm in diameter.

Both Dinden and Davies Creek national parks are recognised as the best remaining strongholds for the endangered northern bettong Bettongia tropica. About the size of a possum, these small, solitary animals relish the taste of truffles (underground fungi), feeding almost exclusively on them. This unique feeding behaviour helps maintain forest health by spreading truffle spores, an essential part of the life cycle of many trees. During the day northern bettongs rest in well-concealed grass nests. At night you may be lucky enough to see them as they search for truffles. Look for their spritely bounce. These unique creatures were once widespread but today only four small populations remain.

The Queensland endemic southern brown bandicoot Isoodon obesulus peninsulae, previously thought to be restricted to the wet coastal regions of eastern Cape York Peninsula, has recently been recorded in the Davies Creek area.

Other significant species recorded in the area include the northern quoll Dasyurus hallucatus, black-footed tree-rat Mesembriomys gouldii and platypus Ornithorhynchus anatinus, all of which have restricted distributions.

Davies Creek National Park is characterised by low, open eucalypt forest featuring melaleucas and acacia woodlands studded with grass trees and termite mounds. Tall, moist gallery vine forest grows along some banks of Davies Creek. The park represents a gradational pattern of vegetation between the Wet Tropics and Einasleigh Uplands biogeographic regions, which is expressed in its very diverse eucalypt and gallery forest communities. Plant records total 69 species and include at least three near threatened (rare) species. Wildflowers bloom in spring and bring an array of colour and aroma to the area.

Cycads (Cycas spp.), primitive plants that evolved before flowering plants when the first dinosaurs walked the earth, may be seen in the surrounding forest of Davies Creek National Park. Cycads are palm-like plants with leathery leaves and seeds known for dangerous levels of toxins.

Emerald Creek is nestled in among the dry sclerophyll forest of Dinden West Forest Reserve. The vegetation is characterised by eucalypts, acacias and grevilleas with some pandanus trees, paperbarks and cypress pines in moister gullies. Leaves of eucalypts often look quite similar, but the barks of these trees vary considerably. Those of ironbarks are solid and thick with longitudinal furrows. The bark of bloodwoods is often tessellated, or chequered, loose and flaky. Gum trees shed their bark annually exposing the new, smooth, inner bark below.

While on the walk to the falls, look for the bushmen's clothes peg tree Grevillea glauca. This tree produces hard woody fruits that are partially split, just like a clothes peg.

The landscapes of Davies Creek National Park are largely derived from Tinaroo granite, which intruded into the overlying metamorphic Hodgkinson formation during the early Permian period 260–270 million years ago. Weathering and erosion of the metamorphic rocks have given rise to the rugged granitic landscapes that characterise the park. Near Davies Creek, in the broad water-worn slabs of this Tinaroo granite, you can see traces of a dark silicate mineral—biolite.

The Buluwai people have used this area for ceremonies, painting and tool making as well as for collecting and hunting food.

Since non-Indigenous people arrived, the area has been farmed, mined and logged. In 1876 John Atherton, the first European to sight the area, was enthralled by the emerald green grass, and established a home for his family and 1,500 head of cattle near what is now known as the town of Mareeba. Gold was discovered in Davies Creek in the early 1900s and logging in the area also began around this time. Although timber harvesting continued until the 1980s, most occurred from the 1940s to the mid-1970s. Some of the maple trees were used to build mosquito bombers during World War II. In order to make the airframe as light as possible, and owing to a shortage of light alloys, the mosquito was built almost entirely of wood. These ‘wooden wonders’ were designed as an unarmed light bomber, the speed of which would be its primary defence. Historic pack routes, used to transport supplies between the coast and the Atherton Tableland, pass through Dinden National Park.

Most of Dinden National Park is also protected as part of the Wet Tropics World Heritage Area (WTWHA). Proclaimed in 1988, the WTWHA extends for about 450km between Cooktown and Townsville. Consisting of nearly 900,000ha, vegetation is tropical rainforest, open eucalypt forest, wetlands and mangrove forests. The WTWHA meets all four natural criteria for World Heritage listing. These criteria recognise the area's exceptional natural beauty and the importance of its biological diversity and evolutionary history, including habitats for numerous threatened species. The WTWHA also has cultural significance for Aboriginal people who have traditional links with the area and its surrounds.