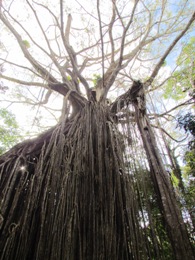 The curtain fig is deciduous. 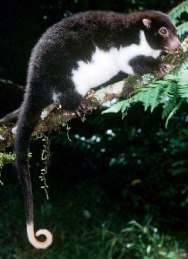 Herbert River ringtail possums are listed as near threatened. 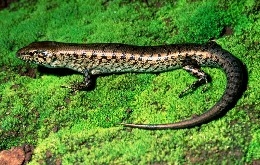 Near threatened rainbow skinks are found in mabi forest.

The curtain fig tree is a green fig Ficus virens and the strangling habit is common to this and other tropical rainforest fig species. Green figs produce red fruit and fleshy leaves that are eaten by a wide range of birds, insects, bats and other mammals. Don’t be surprised to see bare branches—green figs are deciduous and drop their leaves during the cooler months.

The vegetation at the Curtain Fig National Park is mabi forest (also called type 5b and complex notophyll vine forest). Less than 4 per cent of mabi forest now remains and it is listed as an endangered plant community. Although most of these remnants are now officially protected, they are still threatened by feral and domestic animals, weeds and the effects of fragmentation.

Fig trees and fig wasps have an interesting, interdependent relationship and each species of fig wasp is only able to fertilise the flowers of one species of fig tree. The tiny female fig wasp (just 3mm long) is attracted by the smell of the female flowers inside the developing fig. The female bores into the fig and deposits her eggs in the female flowers. In the process the female wasp fertilises many of the surrounding flowers. The larvae develop and produce a substance to stop the fig fruit from ripening—ensuring the fruit and larvae are not eaten. As the wasps mature, the males emerge and fertilise the female wasps before burrowing through the fig wall. This stimulates the male flowers to open and the emerging female wasps become covered in their pollen. The female wasps, covered in pollen, burrow out of the fig and fly off in search of another fruit.

Under the curtain of night

Night is a busy time at Curtain Fig National Park. Many animals prefer to move about under the cover of darkness when their predators are asleep. From a predator’s point of view, darkness offers the opportunity to take advantage of prey that is not available during the day—from nocturnal (night-time) animals to worms that burrow to the surface when the sun goes down. Being nocturnal also allows animals to avoid competition with other diurnal (daytime) animals. Owls do not have to compete with hawks and eagles and nightjars take the place of swallows, swifts and flycatchers.

The fauna of mabi forest is well documented. Over 130 species of birds are listed as mabi forest inhabitants and 41 of these have so far been recorded in the Curtain Fig National Park.

A range of frogs and reptiles have been recorded in mabi forest including the near threatened rainforest skink (Eulamprus tigrinus).

The volcanic features of the landscape on this part of the Atherton Tableland are between 10,000 (Pleistocene) and 2 million (Pliocene) years old. As the volcanic rocks cooled and eroded, they formed the fertile basalt soils of today and were colonised by mabi forest. The forest floor of both parks is littered with basalt boulders. As a result, although the area was selectively logged, it was too stony to be cleared for agriculture.

Mabi forest occurs only on fertile (high in phosphorus and calcium) basalt soils in areas where rainfall is between 1,300 and 1,600mm a year. It once covered the area north and west of Malanda.

Curtain Fig National Park is within the Wet Tropics World Heritage Area (WTWHA). Proclaimed in 1988 the WTWHA extends for about 450km between Cooktown and Townsville. Consisting of nearly 900,000 ha, vegetation includes tropical rainforest, open eucalypt forest, wetlands and mangrove forests. The WTWHA meets all 4 natural criteria for World Heritage listing. These criteria recognise the area's exceptional natural beauty and the importance of its biological diversity and evolutionary history, including habitats for numerous threatened species. The WTWHA also has cultural significance for Aboriginal people who have traditional links with the area and its surrounds.

As early as 1912, proposals for settlement and timber reserves were considered for the Curtain Fig National Park area, but the land was considered too stony to be cleared for agriculture. On 15 March 1913 an area of 486 acres was gazetted as a reserve for timber purposes. The timber reserve was cancelled in April 1915 and on the same day the area was gazetted state forest. The Curtain Fig State Forest became a part of the Wet Tropics World Heritage Area in 1988 and was converted to national park in 2005.