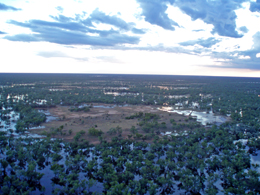 Only the eastern extremity of the park receives water from the Culgoa River system, which is within the Maranoa-Balonne catchment. Low ridges clad in silver-green mulga separate it from watercourses and artesian springs of the Warrego-Paroo catchment to the west.

Low-lying alluvial floodplains cover most of the park and are lightly timbered with coolibah Eucalyptus coolabah or black box E. largiflorens over a cover of native grasses, including never-fail grass. The black box woodlands are significant, being confined in Queensland to small areas around the Paroo, Culgoa, McIntyre and Moonie rivers but more typical of areas further south.

To the west, away from the Culgoa River, brigalow and woodlands of pungent-scented gidgee Acacia cambagei grow on the plains. Red earth and stony ridges in the park's north-west support mulga plant communities, scattered with western bloodwood Corymbia terminalis. It is here that the rare mulga heath-myrtle Thrytomene hexandra is found.

At Tego Springs and other locations, water discharges naturally from the Great Artesian Basin as open muddy pools. Because areas of artesian springs are isolated from each other, they usually have unique communities of plants and animals.

Red and eastern grey kangaroos live in most areas of the park, while darker coloured western grey kangaroos inhabit the park's north-western sections. Narrow-tailed planigales and fat-tailed dunnarts (small mice-like marsupials) hunt at night for a meal of insects, spiders, insect larvae and other invertebrates.

In the warmer months, look for lizards and skinks. Bearded dragons often perch on fallen timber or fence posts while shingleback lizards creep slowly across the ground. Yakka skinks (listed as "vulnerable to extinction") burrow into sandy soils. Smooth knob-tailed geckos and Kinghorn skinks occur here at the eastern edge of their known distribution. 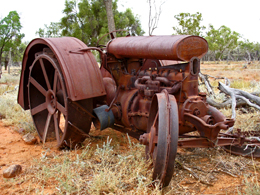 Evidence of the former station is scattered throughout the park.

In 1994, the former Byra Station was declared as Culgoa Floodplain National Park. Since then, the acquisition of Myola, Toulby and other adjacent properties has increased the park's size to 61,900ha.

A range of Aboriginal cultural sites are found within the park. More recent heritage sites, including Hillview Homestead, Redbank Hut and old wells, fences and yards, are relics of the park's sheep and cattle grazing history. Heritage sites and artefacts are protected. Please leave everything as it is found.