Take your canoe and kayak for a majestic paddle along the edge of the lake. Photo credit: © Tourism Tropical North Qld 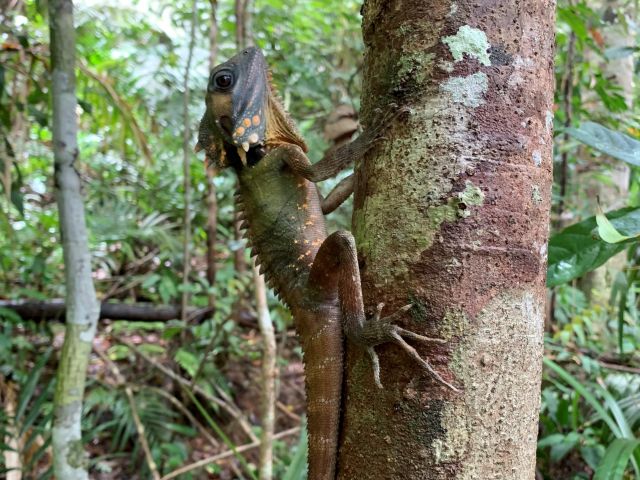 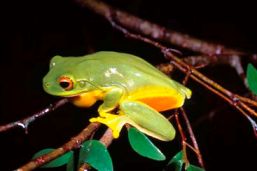 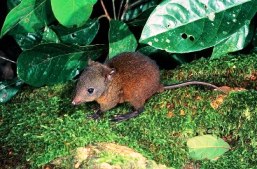 Most visitors will see Australian brush-turkeys in the day-use areas. 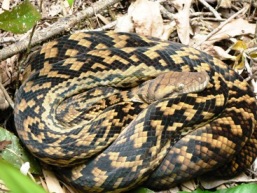 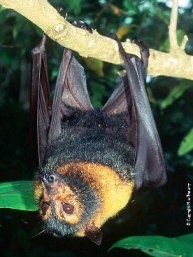 Spectacled flying-foxes are seen flying over Lake Eacham near dawn and dusk.

Crater Lakes National Park is part of the Wet Tropics World Heritage Area and supports a wide range of flora and fauna, with several endemic bird and mammal species.

In 1984 numbers of these fish began to decline and by 1987 the flyspecked hardyhead was the only native fish remaining. Gone too were the freshwater crayfish. At the same time, other species of fish began to appear, thoughtlessly introduced into the lake. Although these intruders—archerfish Toxotes chatareus, barred grunter Amniataba percoides, mouth almighty Glossamia aprion, eastern rainbowfish Melanotaenia splendida splendida, bony bream Nematalosa erebi and others—are native to Australia, they are not native to this lake and have out-competed Lake Eacham's ‘true locals’.

In 1989 an unsuccessful trial reintroduced 3000 Lake Eacham rainbowfish into Lake Eacham. None were found in surveys conducted six months later. Today, at least nine types of fish are found in Lake Eacham.

Although the lake’s true residents are available in captivity and breed readily, they could only survive in the lake if all of the introduced fish were first permanently removed—something impossible to achieve.

A lesson can be learned from the mistakes made at Lake Eacham. Animals belong in their own habitats where they make important contributions to the local ecosystem. When different animals are introduced, plants and animals in the area are affected.

Lake Barrine has not been immune to invasive pest species either, with tilapia being found in the lake. Queensland Parks and Wildlife Service works with Fisheries Queensland, the Traditional Owners and Lake Barrine Teahouse and Cruises to monitor the tilapia population and its effect on the natural environment.

The volcanic features of the landscape on this part of the Atherton Tableland are between 10,000 (Pleistocene) and two million (Pliocene) years old. Lake Eacham and Lake Barrine are maars— volcanic craters formed by two massive explosions from superheating of groundwater. These vents now form the catchment of the lakes and the water depth of both lakes is 65m deep. Some of the original underlying sedimentary rocks occur today as metamorphics outcropping in parts of the crater rim.

No streams flow into or out of Lake Eacham, with water only lost through seepage and evaporation. The water level can fluctuate 4m between wet and dry seasons.

Toohey Creek drains Lake Barrine, which means the water level of the lake remains fairly constant throughout the year, except during periods of severe inundation. The water from Toohey Creek feeds into the headwaters of the Mulgrave River.

Differences in soil type, drainage and past disturbances have a profound effect on vegetation type around Lake Eacham. Beside the road to the east lies a structurally ‘simple’ rainforest type that occurs commonly on less fertile soils, derived from metamorphics. These grey soils are distinct from red basaltic soils. Notably absent in this forest type are trees with large buttresses and great complexity of life forms. Here the trunks are more uniform in size, producing a ‘pole forest’ appearance, and are typically covered with white and grey lichens. This contrasts with the forest growing on the more fertile basaltic soils which occur around most of the crater. This complex forest has tree trunks of variable size, an uneven canopy, and epiphytic plants and vines at various heights. Fishbone ferns, characteristic of forest on metamorphic soils, are replaced by maidenhair ferns.

Early in the century, a large part of the forest to the east of the lake was cleared and used for a variety of farming. At the start of the track, travelling clockwise from the picnic area, a 5 acre (2 hectare) section was again cleared during the second World War. These previously cleared areas show a marked change in vegetation type, evidenced by a predominance of wattles in the canopy and a large number of young rainforest species in the understorey.

There are 10 known species of near threatened and threatened plants around Lake Eacham.

Lake Barrine is entirely complex forest (type 1b) except for a small granite intrusion that has resulted in a patch of related notophyll forest. The complex forest type is found on fertile basaltic soils and has tree trunks of variable size, an uneven canopy, and epiphytic plants and vines at all heights.

Crater Lakes National Park is within the Wet Tropics World Heritage Area (WTWHA). Proclaimed in 1988, the WTWHA extends for about 450km between Cooktown and Townsville. Consisting of nearly 900,000ha, vegetation includes tropical rainforest, open eucalypt forest, wetlands and mangrove forests. The WTWHA meets all four natural criteria for World Heritage listing. These criteria recognise the area's exceptional natural beauty and the importance of its biological diversity and evolutionary history, including habitats for numerous threatened species. The WTWHA also has cultural significance for Aboriginal people who have traditional links with the area and its surrounds. HQ 1 Corps troops enjoying the sunshine and a swim at Lake Eacham, 17 December 1944. 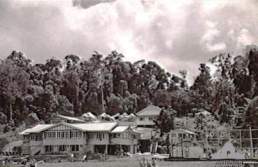 The quarters of the 2/1st Australian Convalescent Depot on the banks of Lake Barrine, 16 August 1943. 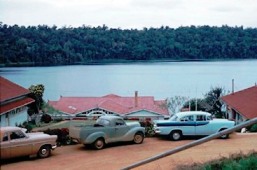 The Traditional Owners ask that you take care and respect their country during your visit.

In 1888 the natural and recreational significance of the lake was recognised and it, along with a narrow band of shoreline vegetation, was proclaimed a scenic reserve. It wasn't until 1934 that Lake Barrine was gazetted as national park.

George and Margaret Curry pioneered tourist use of Lake Barrine in 1920, with George working as a ranger appointed by the Lakes Trust. The teahouse was built as a recreational hall in 1928 and converted to a guesthouse in 1935. During the second World War it was used by the Australian Army as a convalescent home. The Curry family has been running the teahouse and boat trips around the lake for more than 80 years.

The area was first surveyed in 1886 and subsequently subdivided into farm blocks for settlement. In 1888 the natural and recreational significance of the lake was recognised and the area of the lake and a narrow band of shoreline vegetation was proclaimed a scenic reserve. At different times during its history, Lake Eacham had a guesthouse, and power boating and water skiing were allowed on the lake. It wasn't until 1934 that Lake Eacham was gazetted a national park.

In October 1943 the Commonwealth of Australia cleared 5 acres (2 hectares) of the picnic area and developed an amenities centre for Australian Military Forces (AMF) personnel. While in this area, the AMF installed a new diving platform and jetty, and built toilets, changing sheds, picnic facilities, paths and steps. The dressing sheds and turtle viewing deck were also repaired. Concrete steps, toilets, changing sheds and a jetty were also built. The AMF used the area for 2 years.