The edge of the Hurdle Gully Scrub within Scientific Area 33 in Coominglah State Forest. 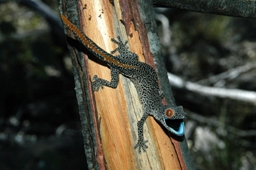 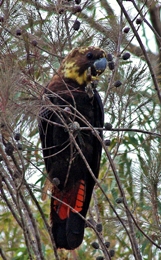 A female glossy black-cockatoo, with distinctive yellow splotches around its head, feeding on allocasuarina seeds.

During the Jurassic period around 190 million years ago, land to the west of the mountains of the New England Fold Belt subsided to form the Surat Basin, part of the Great Artesian Basin. Rivers from the west spread out across the plains, depositing coarse quartz sand in a thick layer over older rocks. This sand layer was later overlaid by other sediments from eroding mountains to the east. The sediments formed softer rocks such as Evergreen Formation (grey siltstone, shale, fine-grained sandstone and mudstone) and Hutton Sandstone (clay and carbonates).

Rising high above Hurdle Gully are cliffs of resistant Precipice Sandstone—these are extremely thick beds of cross-bedded quartz, which rest on weathered older rocks. The coarse porous sandstone absorbs water from the surface and stores it at depth. The soil below these cliffs has developed on the weathered older rocks, and it supports the semi-evergreen vine thicket of Hurdle Gully.

Lower levels of Coominglah typically include sandstones and alluvial soils along Boogalgopal, Lockhart and Bailey creeks.

Coominglah State Forest lies within the Brigalow Belt, which stretches from Dubbo in central-western New South Wales north to Townsville in Queensland. The State forest area in Coominglah supports 650 plant species and 440 fauna species and contains a fine example of remnant dry seasonal subtropical rainforest. But there are threats. Over the years, a large area of brigalow bush has been cleared for agriculture while feral plants and animals have also had an impact. As a result, the semi-evergreen vine thicket of Hurdle Gully has been declared an endangered ecological community under the Commonwealth Environment Protection and Biodiversity Conservation Act 1999.

The forest in Coominglah is dominated by brigalow Acacia harpophylla along with spotted gum Corymbia citriodora, Gympie messmate Eucalyptus cloeziana, narrow-leaved red ironbark Eucalyptus crebra and two grey gum species—Eucalyptus longirostrata and Eucalyptus major, all prized as a source of forestry timber for 70 years. The understorey of native grasses was used for cattle grazing.

Spotted gum and other smooth-barked eucalypts in this forest are a vital source of nutrient for the yellow-bellied glider Petaurus australis australis. These big, gregarious and noisy mammals emerge at night to cut triangular incisions into the trunk with their strong teeth. They lick the sap that seeps from the bark.

In Coominglah State Forest, glossy black-cockatoos Calyptorhynchus lathami—listed as vulnerable in Queensland—predominantly feed on Allocasuarina littoralis and Allocasuarina torulosa. Often the only sign of their presence is the soft sound of seeds cracking. During feeding sessions, they drop the chewed remains of the cones, termed ‘orts’. These orts may litter the ground beneath the favoured food tree for months.

The golden-tailed gecko Strophurus taenicauda, with its dark blue mouth-lining and bright orange eyes, is one of the world's most colourful geckos. They come out at night in search of insects. Females lay two eggs but take no care of them or their young once they hatch. Golden-tailed geckos are listed as near threatened in Queensland and only occur in this area of the Queensland Brigalow Belt bioregion. They are rarely seen as they hide on tree trunks under shedding bark.

Fire, which favours eucalypt forest regrowth, can have devastating effects on dry rainforest areas such as Hurdle Gully Scrub. Fire causes the edges of the dry rainforest to burn and eventually recede as the eucalypt forest edge advances. A coordinated fire management system between graziers and Queensland Parks and Wildlife Service is designed to maintain a healthy eucalypt forest with good grassy understorey and aims to reduce the risk of wildfires burning into and devastating the vine thicket.

The dysentery plant Grewia latifolia, used by both Indigenous people and European settlers as a medicinal plant to relieve dysentery, grows on the border between the two types of forest.

A serious threat to flora and fauna within Hurdle Gully Scrub is the introduced weed called coral berry Rivina humilis, which thrives in shaded areas and spreads rapidly. It has small white flowers that develop into distinctive and attractive red berries. A mass carpet of coral berry quickly forms when the berries drop to the ground and germinate or seeds are spread through the area after being eaten by pigeons, quails and brush turkeys. If unchecked, this weed can displace native understorey plants and prevent species such as black-breasted button-quail from foraging on the forest floor.

Fungi and insects accelerate the rate of decay of rotting organic matter. This ensures that leaf litter eventually returns nutrients to the soil from which this forest grows. 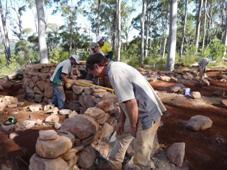 Coominglah State Forest (41,043ha) was gazetted in 1935 to protect the forestry values of the area. Its timber resources were harvested for almost 70 years before logging ceased in 2002. Logs were usually transported to local mills. Most of the foresters worked for local mills cutting spotted gum Corymbia citriodora, Gympie messmate Eucalyptus cloeziana and narrow-leaved red ironbark Eucalyptus crebra. Government foresters managed the area, following a practice of sustained growth.

Coominglah State Forest was never clear-felled but it was selectively harvested, ensuring seed trees were left. Trees were measured every three years to monitor growth, and those selected for harvesting were marked with a 'crown hammer' which left an imprint of the crown. Markings indicated the angle each tree was to be felled to avoid damaging other trees. The heads of felled trees were burnt in situ to create an ash bed for seed germination.

Most unmarried foresters enjoyed the pay benefits of living in barracks within the forest; they receivedg an allowance and saved on the cost of transport from town to work each day. Overseers lived in small houses in the forest, but married foresters usually preferred to live at home with their families.

During WWII some Italian prisoners of war (POWs) were offered the choice of staying in confinement or accepting work. While many chose to live and work on local farms, some built roads through the forest and were housed in other barracks built in Coominglah.

Sourcing minor forest products was an important secondary industry. By paying royalties to the Crown, local people were able to supply sleepers for railways, pit props for mines, fence posts and gravel for roads. Beekeepers kept healthy hives among the flowering eucalypts.

Trees were milled close to the forest, either with portable mills or at one of a number of family-owned mills near Monto. These supplied sawn timber for houses. Crows ash Flindersia australis—one of the finest rainforest hardwoods—was prized for its springy non-splitting quality. It was used for the dance floor at the Moonford Hall, and for squash courts.

The tall gun-barrel trunks of spotted gums were logged for telegraph and electricity poles. Each logging phase cut trees with smaller girths.

Cattle have grazed the Coominglah undergrowth since the 1870s, as the lush native grasses provided good fodder for cattle. Sixteen grazing leases are still active in areas of the forest.

Queensland Parks and Wildlife Service (QPWS) has custodial responsibilities over Coominglah State Forest. Although no timber is currently harvested, QPWS rangers manage the area for wildlife conservation and recreational opportunities. Roads, facilities, pest and fire management are all undertaken with care to ensure the values of this State forest are conserved for future generations.

Coominglah is one of several parks and forests in this district, including the popular Cania Gorge National Park, where QPWS rangers maintain major roads, fire control lines, walking tracks and fencing for conservation. Their major focus and expenditure is on fire and pest management—feral animals and weeds.

QPWS hopes visitors will enjoy Coominglah State Forest and, through minimal impact recreation, help to look after it for the many visitors who want to enjoy it in the future.