Be inspired: Cooloola offers a family-sized camping adventure with ‘the lot’!

Chances are, if you’ve heard of Cooloola, you might know it as the sandy beach highway between Rainbow Beach and Noosa, the mecca of four-wheel drivers and fishers. Photo credit: © Lachlan Gardiner

Be inspired: Short walks for the family around south east Queensland

Walking in Queensland National Parks is a fun way to be healthier and happier, and to share special times with family and friends. Photo credit: Ellie Jamieson © Queensland Government

Over the past 2 million years, ocean currents and waves have swept sand north from the continental shelf of New South Wales and southern Queensland. Sand accumulates and covers the bedrock to form dunes parallel to the coast, leaving only peaks uncovered—today's headlands.

Fraser Island and Cooloola are remnants of sandmasses once stretching 30km east. Major dune-building has continued in episodes as sea levels rise and fall, forming a sequence of at least eight overlapping dune systems of different ages, some more than 500,000 years old—the world's oldest recorded sequence. These processes continue shaping the sandmasses. 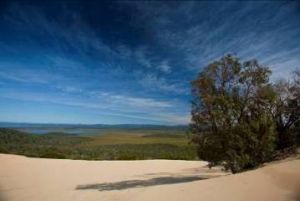 Sandblows form when strong onshore winds break through the vegetation cover, driving sand from the eroding dunes. They engulf forests in their paths, at rates of up to 1 metre each year. New sandblows can also form when the stabilising plant cover is damaged by fire and wind, walkers and vehicles.

Scattered along the beaches are outcrops of soft, dark-brown 'coffee rock', made up of sand grains weakly cemented by organic matter (plant remains). This is a reminder of a time when the sandmass stretched further to sea—and the currently exposed coffee rock was inland, formed as part of the sandmass's soil layers.

Underlying parts of the windblown sandmasses of Fraser Island and Cooloola are coloured sands—the visible parts of older sands that have bound with clay into a weakly consolidated mass. The yellows, browns and reds are colours created by iron-rich minerals in the dune sands which, over thousands of years, stain the sand a complex array of tones and hues. Spectacular sculptures emerge where wind and rain erode the sandmass, exposing this soft older core. These can be seen at Rainbow Gorge and Cathedrals, where the Pinnacles and Red Canyon are striking examples. 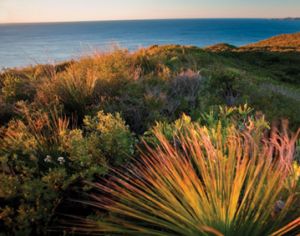 Amazingly, each of Great Sandy's freshwater dune lakes is unique in shape and colour. More than 40 dune lakes occur here—over half the world's known total. Lake Boomanjin, the world's largest perched lake (200ha) and Boomerang Lakes, some of the world's highest (120m above sea level), are on Fraser Island.

Perched lakes such as Birrabeen and Lake McKenzie on Fraser Island and Lake Poona in Cooloola are the most common type of lake in Great Sandy National Park. They develop when a saucer-shaped 'hard pan' of organic debris, sand and peat forms in a depression between dunes. Water collects, slowly filtering to the watertable below.

Barrage lakes form when a mobile sand dune dams a watercourse, usually in younger dunes close to the coast. Interested visitors can walk to Lake Wabby on Fraser Island, from the eastern beach.

Window lakes, generally at low elevations, form where the ground surface drops below the watertable level and fills with groundwater. Some window lakes have been barraged by sand dunes.

All the freshwater lakes are low in nutrients and support few plants and animals. Most lakes have only two or three fish species.

Eli and Wanggoolba Creeks are noted for their flow of crystal clear water—mainly localised outflows of groundwater from the sandmass. They contrast with the golden-brown, tannin stained creeks and seepages such as those into Lake Boomanjin. How are forests created on bare sand?

Decaying plants return these minerals to the sand. Over time, minerals are concentrated in the sandmass, providing nutrients that support a succession of forest types, from coastal pioneers and shrubby woodlands to tall rainforests.

However, on Great Sandy's older dunes, the nutrient layer has been leached by water beyond the reach of even deep tree roots. The tall forests are replaced by stunted woodlands, shrubs and low heaths. This phenomenon—retrogressive succession—is of international scientific interest.

On Fraser Island, older dunes generally lie to the west, overlaid partly by progressively younger dunes to the east.

Watch out for bluebottles with long blue stingers, sometimes washed ashore following strong winds. Flotsam, such as jellyfish is food for scavenging crabs and birds, adding nutrients to the sand.

Pioneers and coastal forest—holding dunes together

Holding the coastal foredunes together are salt-tolerant pioneer plants: pigface, with fleshy angular leaves and purple flowers, goatsfoot vine, with purple trumpet flowers, and beach spinifex, creeping over the dunes and trapping sand swept from the beach by the wind.

Protected from the harshest salt-laden winds, and growing where richer sand is starting to develop, trees in the mixed forests and woodlands are larger than those of the coastal forests, though more stunted than the same species in the tall eucalypt forests.

Fires clear the understorey of foxtail sedge, bracken, blady grass, and fallen leaves and twigs, providing an ash bed for new seedling growth. With age, trees develop hollows that shelter nesting birds and nocturnal gliding possums. Ant nests are conspicuous on the forest floor, and more than 300 species of ants have been recorded in Great Sandy National Park. The coastal banksia, Banksia inegrifolia, is a common delight throughout Cooloola. Aboriginal people valued the flower for its sweet nectar, released when soaked in water.

Tall eucalypt forest grows on the ridges on the high middle dunes in the centre of the sandmass. It surrounds the central forest core, protecting rainforests from drying winds and salt.

After fire, eucalypts of the tall forest regenerate from seeds released into the ash bed. They also sprout new leaves from special buds protected under thick bark, and from lignotubers (woody tissue attached to the root system) below the ground.

Blackbutt trees were the mainstay of the timber industry. Visitors can see remnant stumps of former giants. You may notice occasional large, shield-shaped scars near the base of some trees, where Indigenous people removed bark for gunyahs (shelters).

The slopes and valleys of the middle, high dunes have the best protection from winds, receive the highest rainfall and have the deepest accessible soils. They are dominated by huge brush box, with bark 'stockings' on their lower trunks and smooth red limbs, and the tall, straight-trunked, stringy-barked satinay. Their long roots reach rich nutrients buried deep in the dunes.

In other areas, lichen-covered trunks of giants such as kauri and hoop pine emerge above lilly-pilly, quandong, brush box, and strangler figs, draped in vines, orchids, ferns and mosses. Walk slowly to see colourful fungi sprouting on rotting trees, their fine threads slowly decomposing the wood.

These rainforests are known as vine forests. Along their drier margins are low vine forests of small-leafed grey myrtle ('carrol' scrubs).

Hollows in older trees are nesting sites for mammals and for birds including king parrots, yellow-tailed black cockatoos and sulphur-crested cockatoos, often heard screeching from treetops. Brushtail possums, sugar gliders and flying-foxes are active at night.

Wallum communities dominate the older western dune systems, where the main nutrient layer has leached down beyond the reach of tree roots. Only shrubs and smaller trees can grow on the infertile upper sand layer. In seasonally waterlogged areas, paperbark and wet heathlands grow in dense stands.

Look closely at the hard wallum banksia seed cases—they open only with the heat and smoke of fire, releasing seeds that take advantage of the lack of competition after a fire. Most of the plant communities in the Great Sandy region respond to the frequency and intensity of fires and the season in which they occur. 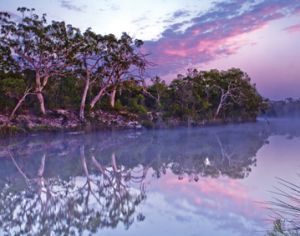 Frequent fire maintains grassy heathlands by inhibiting tree growth. This preserves habitat and food for fairy wrens and ground-dwelling birds such as quails and ground parrots. Heaths and swamps are home to 'acid' frogs that can tolerate mildly acidic waters, the harmless freshwater snake, and several crustaceans.

Swarms of biting insects and an occasional smell of decomposition mean mangroves are not always pleasant for visitors. But the shelter of their roots and the deep layers of decomposing leaf litter make mangroves the nurseries and feeding grounds for much marine life in the Great Sandy region. Mangroves are also important in the food webs of nearby heathlands. Great Sandy's mudflats and sandflats are major feeding grounds for migratory shorebirds such as bar-tailed godwits on their flights from the northern to southern hemispheres.

Archaeological evidence suggests Aboriginal people have lived in the Great Sandy area for at least 5000 years, but they may have been here far longer.

The first written record of the region is from Cook's discovery voyage of Australia's east coast in 1770. However, there are references to the area in old Portuguese navigation charts, and lead weights mined in France between 1410 and 1627 AD have been found on one of Fraser Island's beaches, suggesting that Europeans may have visited the region well before Cook.

Early impressions of the region were not positive. Matthew Flinders, the first English explorer to set foot on Fraser Island in 1802, noted 'nothing can be imagined more barren than this peninsula'. That perception changed in 1842, when pioneer Andrew Petrie reported good pastoral lands and excellent forests in the area. This attracted settlers, who grazed horses, sheep and cattle at Cooloola and Fraser Island.

Logging of valuable kauri pines began on Fraser Island in 1863 and Cooloola in 1866. After the Gympie gold rush of 1867, demand for timber boomed and logging expanded to become the region's major industry for more than a century.

Small-scale mining for heavy minerals, mainly rutile and zircon, began with mining leases granted on Fraser Island in 1949. Sandmining exploration increased in the 1960s, attracting opposition from conservation-minded individuals and community groups. Their efforts eventually ended sandmining in Great Sandy in 1976, while logging stopped in late 1991. National parks were declared in the northern part of Fraser Island in 1971 with more additions in later years and 1992 saw the significant listing of Fraser Island as a World Heritage Area.

Residents have used the area for recreation since the 1870s. Tourism grew slowly. The first commercial tours and accommodation on Fraser Island did not start until the 1930s. This changed with the controversies surrounding sandmining in the 1970s and cessation of logging in the early 1990s, which dramatically increased visitor interest. The subsequent World Heritage listing of Fraser Island increased international visitation. The declaration of the Cooloola Recreation Area in October 2010 has provided for greater protection for the magnificent beaches of Cooloola.

The challenge for management today is to balance conservation of the region's natural and cultural assets with opportunities for people to enjoy the magnificent values of Fraser Island World Heritage Area and Cooloola Recreation Area in Great Sandy National Park.