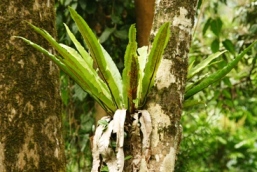 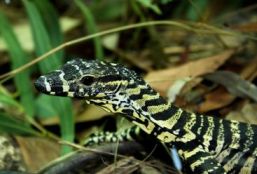 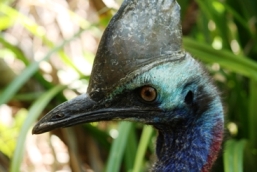 Part of Clump Mountain National Park lies within the Wet Tropics World Heritage Area. Proclaimed in 1988 the area is almost 900,000ha and extends for about 450km between Cooktown and Townsville. The area's vegetation is tropical rainforest, open eucalypt forest, wetlands and mangrove forests. The area meets all four natural criteria for World Heritage listing. These criteria recognise the area's exceptional natural beauty and the importance of its biological diversity and evolutionary history, including habitats for numerous threatened species. The area also has cultural significance to Aboriginal people who have traditional links with the area and its surrounds.

The Wet Tropics Management Authority's website contains more information about the Wet Tropics World Heritage Area, the many things to do there and how it is managed.

This forest was greatly impacted by cyclones Larry (2006) and Yasi (2011). Damage to the forest will be apparent for many years.

Clump Mountain National Park protects a variety of vegetation communities and many of these can be seen along the Bicton Hill circuit track.

The track begins on Bicton Hill's eastern side. Because this side is buffeted by regular high winds and occasional cyclones, the rainforest canopy is dominated by trees able to withstand these conditions. Sturdy tree species include brush box Lophostemon confertus, swamp box Lophostemon suaveolens and milky pines Cerbera inflata.

Many types of epiphytes grow on trees along the track. Epiphytes are plants that grow on other plants for support, but are not parasitic. Common examples on Bicton Hill are birds nest ferns Asplenium australasicum, staghorn ferns Platycerium superbum and elkhorn ferns Platycerium bifurcatum.

In contrast to the exposed eastern side, the sheltered western side provides good growing conditions for tropical lowland rainforest. Alexandra palms Archontophoenix alexandrae, solitaire palms Ptychosperma elegans and strangler figs are commonly seen. Another common feature of the rainforest is buttress roots at the base of many large rainforest trees. These strong, woody masses, roughly triangular in shape, help support the tree and gather nutrients.

Toward the hill's summit two uncommon plants may be seen from the track. These plants are the vulnerable arenga palm Arenga australasica and the Hope's cycad Lepidozamia hopei. The arenga palm grows only in coastal areas and adjacent islands in northern Queensland and in the Northern Territory. It produces clumps of slender trunks, up to 20 m in height, each of which dies after flowering and fruiting. From around May to June the Hope's cycads sprout bright red seeds. These seeds eventually fall to the ground, where they make a night-time meal for the forest's white-tailed rats. Look for the chewed seeds around the base of these cycads.

Clump Mountain National Park is home to a range of animals, including insects, reptiles, birds and marsupials.

In various places beside the Bicton Hill circuit track, termite mounds have been constructed. As well as being homes for the ant-like insects that build them, these mounds are an unusual nesting place for the migratory buff-breasted paradise-kingfisher Tanysiptera sylvia. Kingfishers nest in these mounds from November to April each year, before returning to New Guinea. They excavate nests by first flying at the mounds, missile style, with beaks straight ahead—sometimes dying on impact! They then peck out a nesting chamber, which is later sealed off, from the inside, by termites.

Another animal that makes use of the termites mounds is the lace monitor Varanus varius, the Wet Tropics' largest lizard. Like the kingfishers, the lace monitors also deposit their eggs in termite nests, often in trees. The lizard makes a hole to gain entry, which is later sealed by termites, enclosing the eggs and leaving no trace of the lizard's visit. The constant temperature inside the nest helps incubate the eggs. Mother lizards are believed to return to the termite nest when their eggs are ready to hatch.

If leaves on the forest floor are sufficiently dry, you might hear the rustle of rainforest skinks Eulamprus tenuis moving around. These very small lizards can often be seen along the Bicton Hill circuit track.

The forest floor is also a popular foraging spot for fruit-eating birds, which help disperse seeds in their droppings. These birds range in size from the relatively small emerald dove (Chalcophaps indica) to Australia's largest rainforest bird, the endangered southern cassowary Casuarius casuarius johnsonii. Standing up to 2m tall and weighing up to 60kg, these mainly black flightless birds can look quite imposing with their large casque (a horny protrusion on the top of the head). This species of cassowary is the only species that occurs in Australia. It also occurs in Papua New Guinea and can be distinguished from other species that occur there by its double rather than single wattle—the blue and red flaps of skin hanging around the neck area.

Clump Mountain National Park is also home to marsupials such as the musky rat-kangaroo Hypsiprymnodon moschatus and the nocturnal striped possum Dactylopsila trivirgata. Musky rat-kangaroos are chocolate-brown mammals that are native to tropical north Queensland. At just over 500g they are the smallest of the macropod family. They may be seen foraging in the leaf litter for fruit, fungi and insects and are active during the day. Their name comes from their distinctive musky odour.

During the day striped possums are tucked away sleeping in a tree hollow. At night these black and white possums come out to feed, using their unique elongated fourth finger to probe rotten wood for beetle larvae.

The Djiru Aboriginal people were the original inhabitants of the Mission Beach–Bingil Bay area.

Djiru people used bark canoes and outriggers to catch sharks, dugong, turtles and fish. Canoes were also used to collect bird eggs from nearby islands—the Barnard islands (visible from the lookout on the hill's eastern side) and Dunk Island (visible from the summit lookout).

Rainforest plants were used to make fish nets, shelters, tools, weapons and medicines. A particularly useful species was the milky pine. Chemicals in the pine's bark remove oxygen from water. Djiru people used the bark to catch fish and eels, thrashing it in water until fish suffocated and rose to the surface.

Milky pine was also used as the base for firesticks. A stick of soft wood was placed in a notch in the pine and twirled vigorously between palms. The resulting spark was used to ignite soft material, such as coconut fibre, and then fanned until a flame appeared.

Poisonous seeds of plants such as the black bean and Hope's cycad were put through a complex detoxification process and then used as food. The seeds provided a good source of carbohydrates and were often eaten with rich foods such as eels. The process used for detoxification has been passed on to Djiru descendants over hundreds of years.

The summit of Bicton Hill was used as a ship lookout by the area's first permanent European residents, the Cutten brothers, who arrived on 1 April 1882. They developed one of the major agricultural ventures in North Queensland, growing bananas, coffee, tea, sugar, tobacco, coconuts, citrus and pineapples in the fertile valleys and foothills around Bingil Bay. They named their property 'Bicton' after the town in Devon, England.

Also in the late 1800s, a timber mill was built not far from the foreshore. Trees such as red cedar and northern silky oak were logged from surrounding hills. The mill was destroyed by a cyclone in 1918.