Visitors can explore Donna, Trezkinn and Royal Arch caves on ranger-guided cave tours, which run daily except Christmas Day. Tickets must be purchased in advance from Queensland Parks and Wildlife Service staff based at The Hub in the Chillagoe township. Photo credit: © Tourism and Events Queensland

Be inspired: Chillagoe caves—adventure ‘out back’ and ‘down under’!

Ready for an epic adventure? Think ‘Raiders of the Lost Ark’ type adventure…The kind of trip where you venture into the outback. Photo credit: © Tourism Tropical North Queensland 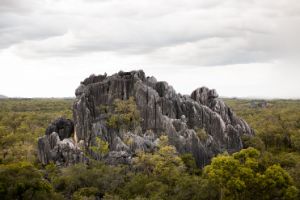 Fig fruit are a favourite with birds and flying-foxes. 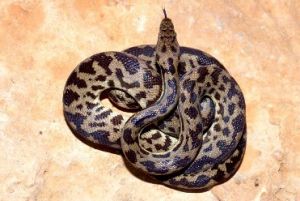 Spotted pythons feed on bats in the caves.

Chillagoe lies within a belt of limestone approximately 5km wide and 45km long, extending from south of Chillagoe, north-west to the Walsh River and beyond. Much more extensive belts occur as far north as the Palmer River.

The limestone was deposited as calcareous mud and coral reefs approximately 400 million years ago, on the bed of a shallow sea where Chillagoe is located today. Major earth movements folded and tilted the limestone and other inter-bedded sediments to an almost vertical position.

Over long periods of geological time, the limestone above the ground has been eroded by water, forming a set of distinct landforms called karst. Today, this limestone appears in gaunt pinnacled outcrops known as bluffs or towers that project up to 40m above the surrounding plains. Different formations can be identified: rillenkarren is limestone with a surface of narrow, sharp-edged grooves; kamenitzas are flat, shallow pans; rinnenkarren are large, vertical flutes in the cliff faces; and grikes are clefts in straight-sided blocks of limestone.

The limestone below the ground has also been slowly dissolving away. Rain combines with carbon dioxide in the air and the soil to form a mild acid. This acid has seeped through cracks and lines of weakness called joints, dissolving the limestone to form underground caverns and tunnels and depositing material in the form of cave decorations.

Cave decorations reflect the condition under which they were formed. In damp conditions, the release of carbon dioxide from the limy water causes the lime (off-white calcium carbonate) to be re-deposited in brilliant sparkling crystals. Stalactites (forming from the roof), stalagmites (forming on the floor), helictites (forming sideways), shawls (draperies or bacon stone) and rimstone pools (gours), all form in this way.

Under drier conditions, after the wet season, and in areas of good ventilation, evaporation of water produces knobbly formations with a chalky surface known as cave coral.

The soils are generally poor and, for most of the year, parched. However, during the wet season (December to March) they can become waterlogged. Bloodwoods, ironwoods and eucalypts dominate the open woodlands on freely-draining soils. Along creek banks where the soils are poorly drained, paperbarks and tea-trees feature.

The limestone outcrops around Chillagoe are dominated by a scrubby type of vegetation containing many deciduous trees. The trees in these vine thickets lose their leaves to reduce water loss during the dry season. Look for bats-wing coral trees Erythrina vespertilio, which develop a cover of red blossoms when their leaves fall. Several types of kurrajongs Brachychiton spp. are recognisable by their slightly bulbous trunks. A type of native bauhinia Lysiphyllum hookeri, with butterfly wing-like leaves and white flowers, can often be seen at the base of the outcrops.

Ghost gums Corymbia dallachiana shed their bark each year. The sparse foliage of the tree crown and the white and yellow new bark make this tree easy to identify.

A number of types of fig trees sprawl across the rocks, attracting birds and flying-foxes at fruiting times. Their fleshy leaves and aerial roots often hang through the caves or form a network around the rocks. Even plants more typical of wetter areas such as stinging trees Dendrocnide moroides and ferns can shelter deep among the crevices in the rocks.

The grassy woodlands within the park attract a variety of animals including kangaroos, wallabies, blue-faced honeyeaters Entomyzon cyanotis and blue-winged kookaburras Dacelo leachii. Catch a glimpse of the bright green and scarlet feathers of red-winged parrots Aprosmictus erythropterus as they fly noisily to distant trees.

Listen for the sound of red-tailed black-cockatoos Calyptorhynchus banksii in the tree tops. Perched on low shrubs, Tommy roundhead lizards Diporiphora australis stare eagerly at the ground below, falling on insects as they come into view.

The temperature within caves is relatively constant, providing a stable living environment for those that have adapted to the darkness.

Eastern horseshoe-bats, diadem leaf-nosed bats and eastern cave bats breed in the caves. Some congregate in small areas to raise the temperature to a suitable level for a nursery.

White-rumped swiftlets Aerodramus terraereginae, like insectivorous bats, use echolocation for flying in the dark—listen for the non-stop metallic clicking as they manoeuvre about the caves. Chillagoe is one of five known nesting regions for the white-rumped swiftlets in Australia. Nesting colonies are large by Australian standards—these birds nest in colonies of 50 or more, breeding from November to February. Nests are made of congealed saliva and kangaroo grass cemented to sloping cave walls.

Spotted pythons Antaresia maculosa are major predators of bats and find their prey by sensing body heat, making them well-suited to the dark conditions of the caves. Brown tree snakes Boiga irregularis also take bats and feral cats Felis catus can be a problem in some areas.

Twenty-seven types of land snails have been recorded on the Chillagoe-Mungana limestone. Leaf litter in rock crevices provides food and reservoirs of moisture. Colonies of snails, isolated in different crevices, have over time, evolved into different species. Many insects and spiders have also been recorded. The powerhouse chimney stands in front of the main smelter chimney on the hill.

The Aboriginal people of this area have lived here for thousands of years. Evidence of occupation at Mount Mulligan dates back as far as 37,000 years. Traditionally, Aboriginal people used many of the natural resources of the area. They made coiled baskets and bags by weaving or knitting native grasses. The soft inner bark from ironbark trees was used to make containers for preparing food, carrying children and holding water. They bent flexible timber to form domed shelters that they covered in tea-tree leaves and bark. They also made axes by chipping rocks and grinding the edges, and used flakes of quartz as knives.

The impact of European settlement, which began with the rush to the Hodgkinson Goldfields in 1876, was quickly felt. During the mid-1800s, as European settlers took up land for grazing, Aboriginal people were moved from their traditional lands and forced to live on the fringes of towns. There was much conflict between Aboriginal people and police, native troopers and settlers, as evidenced by events such as the infamous Irvinebank massacre in 1884. Around this time, when Chillagoe and Wrotham Park stations were taken up, it was common to have Aboriginal people working on the stations. The men were employed as stockmen, offsiders, mechanics, pumpers, yard-builders, fencers and boundary-riders and the women were employed as domestic help.

The Chillagoe Smelters played a significant role in the great age of the mining industry, from 1870 to 1914, which opened North Queensland to settlement by Europeans. The smelters operated almost continuously from 1901 to 1943 and were the centre of a thriving mining industry that brought wealth and development to the Chillagoe area.

Following the establishment of Chillagoe Station by William Atherton in the late 1880s, deposits of copper, silver, lead, mica and some gold were found in surrounding areas. Most ore found around Chillagoe required smelting to extract the minerals.

Small blast furnaces were used at mining sites around the area (Muldiva, Calcifer and Mungana) to process the ore. Mining magnate John Mofatt was the driving force behind this early development. Heavy machinery and supplies were transported by horse-drawn wagons from the coastal town of Port Douglas. The rough terrain and distance made large-scale ore treatment impractical.

In the late 1890s the railway was extended from Mareeba to Chillagoe. By 1901, when the railway was completed, Chillagoe was a flourishing town. The railway enabled the large, innovative Chillagoe Smelters to begin operations by late 1901.

The Chillagoe Company equipped its worksites with the latest machinery and surrounding mines became large scale operations. At the time, the mines, railway and smelters provided work for up to 1000 people. Small townships such as Mungana sprang up. Old miners recall the Chillagoe railway throbbing from the roar of loaded ore trains. The railway line was perceived as the main artery of a once great mining field.

After fluctuating fortunes and closures, ownership of the smelters passed to the Queensland Government in 1919. This brought allegations of political corruption that persisted for many years. Closures plagued the smelters again in the late 1920s and in 1929 a Royal Commission report into the incident ruined the political careers of two former Queensland premiers.

The Chillagoe Smelters operated until 1943 and, in its lifetime, treated 1.25 million tons of ore, yielded 60,000 tons of copper, 50,000 tons of lead, 181 tons of silver and five tons of gold. By 1943 other smelters were built closer to the major ore-producing areas such as Mount Isa. Easy access to these areas outweighed the economic usefulness of the Chillagoe Smelters. In 1950, the buildings and equipment were auctioned.

…the legacy of this grandly inept company was the infrastructure of an entire mineral industry which the State could never have afforded to build for itself, and which functioned in the public interest for over twenty years at very little capital cost. Under both the company and the State, the Chillagoe venture created thousands of jobs, provided railway transport over enormous distances, and kept mines and businesses open throughout the north. Although the Chillagoe smelters never once made a profit, the multiplier effects radiating from them were responsible for a significant proportion of north Queensland's prosperity for nearly fifty years. In the last years the smelters were deliberately being run at a loss by the State in order to continue this economic role in the wider community.

The Chillagoe Smelters are an excellent demonstration of the technology of mineral (copper, silver, lead and gold) smelting at the turn of the century, when up-to-date plant was assembled and then modified repeatedly between 1901 and 1911 to meet local conditions. The size, scale and evidence of smelting processes, which are now rare, are preserved in the physical remains at the Chillagoe smelters. Today the site is managed by the Queensland Parks and Wildlife Service.