Intrepid: fearless, adventurous, audacious, daring… If that sounds like your family facing up to a few days’ camping in a scenic coastal ‘wilderness’, read on! Photo credit: John Atkinson © Queensland Government 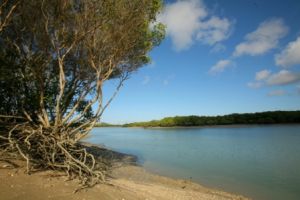 Covering 7200ha, Cape Palmerston National Park conserves one of the few remaining areas of undeveloped coastline between Bowen and St Lawrence in Central Queensland. This park is significant for the extent and variety of its lowland coastal vegetation.

The park is one of only three known protected habitats in Queensland for water mice, which inhabit some of Cape Palmerston’s mangrove communities. This threatened species builds nests of mud in the inter-tidal zone and hunts at night for small crustaceans.

Melaleuca wetlands provided habitat for frogs and numerous other species.

Birdlife here is prolific. The park’s beaches are home to a range of shorebirds, including beach stone-curlews, which are a threatened species. Further inland, pied imperial-pigeons visit the park in late winter and in spring. You might see small flocks of these striking birds feeding on fruit in the many native fig trees. These pigeons are found across northern Australia and New Guinea, but are near their southern limit at Cape Palmerston.

Mount Funnel, in the park’s south-west, is a dominant landscape feature, rising to 344m. Its distinctive cap is harder than the surrounding rock and has withstood millions of years of erosion.

The coastal waters adjacent to the park are part of the Great Barrier Reef Marine Park; they support significant seagrass meadows. Ince Bay (to the north of the park) is a Dugong Protection Area. Estuarine crocodiles are permanent residents of the park’s waterways; turtles and whales are visitors to the nearby seawaters.

An archaeological survey of the park’s coastal sections in 1992 found a number of shell middens (mounds), a tangible reminder of the special connection the Yuwibara people have with this landscape.

Explorer Captain James Cook named Cape Palmerston, Cape Hillsborough and Cape Conway as he sailed up the Queensland coast in 1770.

Before being gazetted as a national park, parts of the area were used for cattle grazing, fishing and oyster collecting. Little evidence of this history remains today.