We recognise the traditional custodians of Wariganda (Cape Pallarenda) — the Gurambilbarra Wulgurukaba people, and pay our respects to Elders past, present and emerging. Around the picnic area, numerous Australian brush-turkeys scratch in the leaf litter and charming yellow-bellied sunbirds can be seen darting from place to place. Agile wallabies and allied rock-wallabies can be seen hopping around and feeding on grass during the cooler parts of the day. Sand monitors are often seen scurrying across the road and sunning themselves on paths.

Beyond the Quarantine Station, open woodland and vine-thickets support a variety of animal life. Soaring in the thermal air currents over Many Peaks Range, large birds of prey such as brahminy kites and white-bellied sea-eagles are often seen. Woodland bird species can be seen around the walking tracks. The foundations of the old jetty can still be seen. 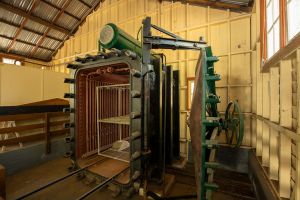 The steriliser and some rails are still in place. 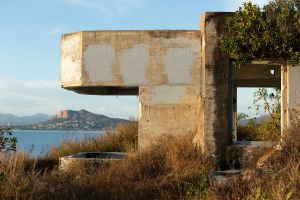 In 1875, the first quarantine station for the port of Townsville was established at West Point, Magnetic Island. Passengers on incoming ships were isolated from the mainland if suspected of carrying contagious diseases, and released when they proved to be healthy.

The isolated site at West Point was difficult to supply and maintain. In 1915, the quarantine station was relocated to Cape Pallarenda. Buildings were disassembled and transported by barge and a new jetty was constructed. Some buildings were constructed from old building materials and others were built new. The tall ceilings and cool, wide verandahs show the typical ‘Queenslander’ architecture of the time.

Access to the township was via a road through what is now the airport and the Town Common.

Today, the disinfecting bathhouse remains with the original autoclave (steam steriliser), fumigator and a section of rail lines.

Passengers arriving at the quarantine station went to the bathhouse. After bathing they were given clean hospital robes while their clothes were sterilised. There was a ‘dirty’ side to the bathhouse and a ‘clean’ side. Anyone entering the ‘dirty’ side had to shower before being allowed onto any other part of the station.

After the cleaning process the passengers went to their accommodation. This was strictly classified—first class, second class and asiatics.

All passengers’ baggage was taken from the ship by a light gauge railway. Anything that could not survive the steam heat of the steriliser was fumigated by being passed through a formalin cyanide chamber on the railway.

All clothes, bed linen and washable items were sterilised. A one-way system was used. Goods from the ‘infected’ ship were loaded into the dirty side of the steriliser and collected at the clean side.

People were quarantined here until 1973. Thirteen fatalities were recorded—unfortunately Vietnamese deck passengers who died from meningitis in 1920. Their graves can be seen on the Graves circuit.

The concrete structures on the headland were built in 1943 during WWII to protect Townsville and it’s harbour from raiding enemy ships.

The Pallarenda Battery was built at the same time as the Magnetic Island Forts Complex, and a third anti-shipping battery was located at Townsville’s port on Magazine Island. All three were decommissioned after the Allied victory in 1945. This site was re-used for training purposes in the 1950s.

The remaining structures include two searchlight stations, two gun emplacements and an observation post. Both gun emplacements housed a 4.7 inch Quick Firing Field Gun (Mark IV), re-purposed from the Kissing Point Battery. Although considered outdated in 1943, their range of 9.9km protected the northern entrance channel to Townsville and Magnetic Island.

Two Vickers machine guns were mounted in the stone reinforced pits to prevent entry onto the headland by enemy on foot. These pits still have the steel framing that supported camouflage netting. Commonwealth documents from 1942 reveal a Japanese landing to the north of Townsville was expected, although this did not eventuate. A Bofors 40mm anti-aircraft gun was on site, located in the horseshoe-shaped stone emplacement west of the observation post.

Officers, non-commissioned officers and enlisted men and women lived here from 1943 to Sep 1945. They had everything they needed: separate sleeping quarters, kitchens and messes, a recreation hall and even a tennis court!

Both Australian and American armies used this area. Camps were set up on nearby beaches and the Quarantine Station was used as an Australian army hospital from 1966 until its relocation to Lavarack Barracks in 1974.

The buildings were then used by the Australian Institute of Marine Science and the Great Barrier Reef Marine Park Authority until the area was declared an environmental park in 1986. It was gazetted as a conservation park in 1994.