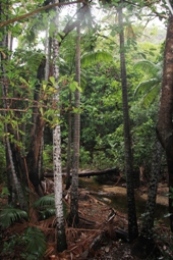 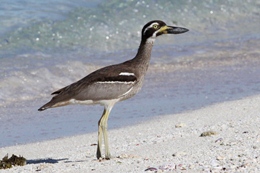 The dramatic and unique landscape of the park has an ancient history. Cape Melville and Barrow Point have outcrops of Permian Altanmoui granite, formed about 250 million years ago. At Cape Melville, the granite has weathered into distinctive boulders forming an unusual mountain range. On the Altanmoui Range the granite is overlaid by sandstone (Battlecamp formation) deposited about 120 million years ago when the region was below the sea. Sediments formed by weathering of the ranges have accumulated around their bases and vegetated inland dunes are found between the two ranges.

The massive, tumbled granite boulders of the Melville Range and the sandstone escarpments of the Altanmoui Range dominate the inland regions of the park. Wetlands, inland dune fields and eucalypt woodlands add to the spectacular diversity of the landscape.

Cape Melville is notable for its high diversity of plants and animals. Plant communities are vast and include eucalypt woodlands, vine thickets, heathlands, grasslands, and mangrove and paperbark forests. Freshwater lagoons are lined by paperbark forests while vine thickets are found between the ranges. The southern section features riparian rainforests, extensive mangrove estuaries and banksia and grasstree swamps.

Due to its remote and isolated location, Cape Melville also has several endemic species—those that occur nowhere else in the world. The best-known endemic plant is the foxtail palm Wodyetia bifurcata. These distinctive palms, with their brush-like fronds and slightly bottle-shaped trunks, decorate the boulder-strewn landscape of the Melville Range. Altanmoui Range is characterised by large hoop pines Araucaria cunninghamii, which emerge spectacularly from the vine forests.

Many birds can be seen or heard throughout the park including the large and raucous, channel-billed cuckoo Scythrops novaehollandiae and the red-tailed black-cockatoo Calyptorhynchus banksii with its harsh grating 'kreeee' call. Bright flashes of blue and a cacophony of squawks reveal the presence of the blue-winged kookaburra Dacelo leachii. Pairs of vulnerable beach stone-curlews Esacus magnirostris can sometimes be seen dashing along the beach. The granite boulders of the Melville Range at Cape Melville. 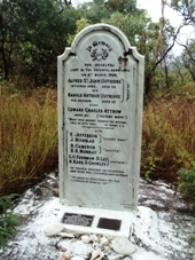 Aboriginal people have occupied and used the Cape Melville (Othawa) area for thousands of years. The area is rich in history, stories, significant sites and traditional identity.

The Aboriginal Traditional Owners for this country belong to several clan groups including Aba Yalgayi, Muli, Bagaarrmugu, Wurri, Manyamarr, Gambiilmugu and Yiirrku. Over countless generations, they developed a complex system of clan estates, languages, ceremonies, stories and sustainable resource-use practices such as burning, hunting, harvesting and fishing. Their long occupation, evidenced by shell middens, burial and rock art sites, has contributed to the significant diversity of vegetation in the area. Traditional practices and stories connect the Traditional Owners with their land. Stories tell of ancestral beings, their activities and role in forming the landscape.

The Traditional Owners of Cape Melville are closely connected with the Flinders Islands people; collectively they identify as the 'Saltwater People' or Yiithuwarra. The islands contain some of Australia's most significant Aboriginal cultural sites, such as the spectacular rock imagery sites on Stanley Island.

Cape Melville was named Stoney Cape in 1815 by Lieutenant Charles Jeffreys on the HM Kangaroo but later renamed by him as Cape Melville. Traditional Aboriginal life remained relatively undisturbed here until the Palmer River gold rush in the 1870s when large numbers of non-Indigenous people arrived in the area for the first time.

As early as the 1880s, young Aboriginal men were being recruited to work in the pearling, beche de mer and trochus fishing industries. The lugger fleets anchored in the protected waters of Princess Charlotte and Bathurst bays. On 4 March 1899, more than 100 vessels were anchored in the area when, without warning, severe tropical Cyclone Mahina crossed the coast at Cape Melville. On this tragic and terrifying night, more than 300 crew members perished, along with an estimated 100 Aboriginal people on the mainland. Half of the pearling fleet was destroyed.

[At Bathurst Bay] the trees are all stripped of leaves and branches and were, in many places, torn up by the roots.

Dead fish of all kinds were piled up, including porpoises, sharks, dugong, sea snakes, also seabirds, land birds and wallabies.

All the boats…had their masts carried away just above the decks…it would appear that the boats had been rolled over and over along the (sea) bottom…About two miles from the cape, wreckage is most plentiful, and in some places it is a quarter of a mile inland from the seashore.

A monument near Cape Melville commemorates this significant historical event.

By the early 1900s, gold had run out and much of this area—more than half of the park—was taken over for cattle grazing as part of the Starcke Pastoral Holding. Many local Aboriginal men worked as ringers, mustering cattle. Today, at places like Wakooka outstation, the scattered remains of stockyards, fences and dams, together with the memories of old ringers, are reminders of this time.

The wreckage of a USA Air Force aircraft is buried in sand just offshore in Bathurst Bay near Cape Melville. It is a C-47A-25-DK Douglas Dakota aircraft, #42-93505, c/n 13424, of the 13th Air Force and serves as a reminder of how close World War II came to this remote area. On 14 March 1945, the C-47 encountered bad weather on a flight from Rockhampton to the allied base at Morotai (Indonesia). The plane ran out of fuel and crashed into the bay. Sixteen of the 22 passengers on board parachuted to safety while the remaining passengers and crew ditched with the aircraft and swam to shore. Two days later, a Mariner flying boat A70-2 of 41 Squadron based in Cairns, began a search for the missing crew. In Bathurst Bay they spotted the mostly-intact wreck about 20m offshore and just south of Cape Melville. Twenty of the survivors were found on the beach, some with minor injuries. Two men, however, were missing. A search later located one of the men but the other, Sergeant Williams, was not found. It is believed that his parachute failed to open.