Pied imperial-pigeons migrate to Brook Islands for the summer. 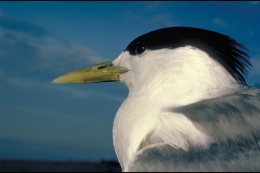 Crested terns are one of seven species of tern that frequent the Brook Islands. 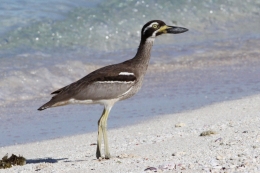 Vulnerable beach stone-curlews have been recorded on North Island.

The Brook Islands are part of the Great Barrier Reef World Heritage Area. They remain one of the few undisturbed island groups between the Whitsunday Islands and Cairns.

The Brook Islands are low islands with a maximum elevation of 62m, and are generally surrounded by rocky foreshores. Encircled by fringing reef, the foreshores are generally rocky and the beaches are made of coarse sand and coral rubble.

Lush rainforest with many vines is the main vegetation type on the Brook Islands National Park.

Golden orchids Dendrobium discolor and pandanus Pandanus tectorius are common along the foreshore. Vulnerable native palms Arenga australasica are a feature of the parks vine-thickets.

Breeding colonies of migratory, seabirds and shorebirds and the presence of coastal raptors make these islands especially important.

Between October and March, the Brook Islands are home to a large colony of pied imperial-pigeons which migrate south from New Guinea to breed. The birds roost and nest on the islands, commuting daily to the mainland and other neighboring islands to feed on rainforest fruits. They return to Brook Islands at night to roost, bringing with them plant seeds.

Monitoring of pied imperial-pigeons began in the park in the 1960s by a local couple, Margaret and Arthur Thorsborne. While monitoring has focused on North Island where numbers are greatest, the pigeons also nest on Middle, Tween, South and other nearby islands. Monitoring has shown that colony numbers declined to fewer than 2000 in 1968 due to frequent, illegal shooting and steadily increased once hunting had stopped. By 1995, the colony was estimated to be about 40,000 birds. Spanning almost 50 years, the monitoring by rangers and volunteers, including Margaret Thorsborne, continues today.

The Brook Islands are important roosting and nesting sites for six species of tern—bridled, black-naped, roseate, crested, lesser crested and little. Numbers of nesting birds vary from year-to-year, but on North Island they have been as high as 1750 lesser crested terns, 550 black-naped terns and 700 bridled terns.

Terns nest on rocky foreshores, beaches and sand and coral spits. Nests with eggs look like beach debris and can be easily trampled. Nesting birds are easily alarmed and will leave their nests if disturbed. Eggs and chicks are then vulnerable to heat, cold and predators and can die quickly.

To prevent disturbance to the colonies, bird viewing should occur only from boats. Access to North (PDF, 185.4KB) , Tween (PDF, 154.6KB) and Middle (PDF, 153.3KB) islands is prohibited. Access to South Island is prohibited from 1 October to 31 March.

White-bellied sea-eagles and ospreys use the islands as nesting sites. Beach stone-curlews, breed on North Island. Once common, they are now classed as vulnerable with numbers less than 1000 Australia wide.