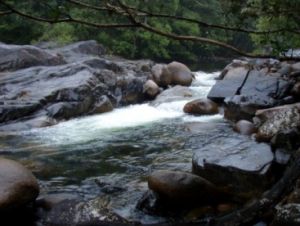 These routes converge just outside the State forest boundary. From here the last 16 kilometres is unsealed but can be accessed using conventional vehicles.

Logging trucks use the access roads to Broadwater and the southern end of the Dalrymple Gap track. To reduce the risk of collision, a three kilometre section of the road between the Dalrymple Gap walking track and Broadwater has been designated for one-way traffic (east to west) only. Please use caution when travelling in this area and obey all signs.The best time to visit is during the cooler months, (May to September). During the wet season (December to April), flooding may temporarily close access roads. Contact the RACQ to enquire about local road conditions and the Bureau of Meteorology for updated weather reports.

The boardwalk at the start of the rainforest walk is wheelchair-accessible. It leads to a magnificent white fig (Ficus virens var. sublanceolata) commonly known as the Broadwater fig. The toilets, showers and shelter shed in the camping and day-use area are also wheelchair accessible.

For more information, please read the guidelines on safety in parks and forests.

Abergowrie State Forest is open 24 hours a day and is generally accessible from May to October. During the wet season, between December and April, the road into the park may be inaccessible. Contact the RACQ to enquire about local road conditions.

Camping permits are required and fees apply. A camping tag with your booking number must be displayed at your camp site.

Special permits are required for commercial or organised events. Contact us for further information.

Domestic animals are not permitted in Abergowrie State Forest.

Daytime temperatures and humidity can be high at any time of the year and nights can be very cool. Please carry suitable clothing to accommodate all extremes. May to September is generally the driest period and the best time to visit, but heavy rain can fall at any time. During times of heavy rainfall, especially in the wet season (December to April), access roads may become impassable. For more information see the tourism information links. Weather forecasts are available from the Bureau of Meteorology.

Fuel and supplies are available at Ingham and Cardwell. For more information see the tourism information links.