We recognise the traditional custodians of the Bowling Green Bay area—the Bindal people, and pay our respects to Elders past, present and emerging.

The national park is dominated by the massive Mount Elliot Range which reaches an altitude of 1221m at Mount Elliot, one of Queensland’s highest peaks. Other prominent peaks are Sharp Elliot (1185m), Saddle Mountain (867m) and Mount Storth (633). The mountainous areas comprise of biotite granite and adamellite masses, with older intermediate lavas and volcanics around the foothills of Saddle Mountain and Mount Elliot, in the vicinity of Alligator Creek. The major rugged landmarks of the parks coastal plains are Cape Cleveland (559m) and Feltham Cone (279m). Viewed from a distance, the peaks and mountain groups present a vista of bare rock faces and steep ridges dominated by eucalypt forests.

The remaining low-lying areas of the national park consist of Quaternary sand dunes, beach deposits, coastal mud flats and silt. Defining the south-eastern boundary of the park is the Cape Bowling Green sand pit. The sand spit is regionally significant as being one of the longest on the Queensland coast. Extending north for over 14km the sand spit is subject to the elements, with sand actively eroded and deposited by waves and the wind and wet season flooding events. The sand spit provides a virtually identical habitat as a sand cay and is an important nesting site for marine turtles, waders and seabirds. 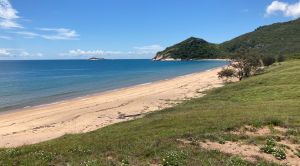 Sheltered cove in the Cape Cleveland section of the national park.

In the sheltered bays between Cape Bowling Green and Cape Cleveland there are extensive areas of mangrove and mud flats. The mangroves are backed on the landward side by seasonal fresh and brackish water wetlands.

The high mountains of Mount Elliot Range intercept the prevailing south-easterlies winds which results in an area with a locally high rainfall. Numerous creeks have eroded parallel valleys that are separated by a series of sharp ridges. Many of the creeks fall as a series of small waterfalls surrounded for much of their course by rainforest. Alligator Creek valley is the most accessible location and is where the national parks’ main visitor facilities are provided.

On the southern mountain slopes creeks meander across the wetlands and saltpans and finally through to the mangroves. The western side of the national park is comparatively dry, the creeks are short and intermittent. Here, eucalypt woodlands dominate the landscape interspersed with low vine forest and hoop pines.

The altitudinal range in the park creates an array of diverse vegetation communities. Mount Elliot rainforest is generally confined to an area above 600m, though it does extend down through the creek lines where semi-evergreen vine thickets separate it from the lowland eucalypt forest. Mount Elliot supports rainforest that once stretched north to Mount Spec and south to Eungella. Isolated as a result of a drying climate, Mount Elliot is now evolving independently from other rainforests and is an important local refuge for wildlife, with some species found only here. The rainforests of Mount Elliot remain important as part of a chain of mountain top rainforests linking the Queensland wet tropics with the central coast rainforests of the Proserpine-Mackay area . 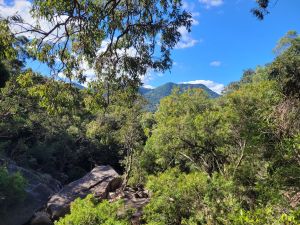 The Mount Elliot rainforest is an important refuge for local wildlife.

The lowland eucalypt forests are dominated by bloodwood, poplar gum, Moreton Bay ash and ironbark. The understorey vegetation, which varies with the slope of the land and soil type, changes from grasses, grass trees and cycads, to palms near the creek lines and in other damp areas. Riverine vegetation of casuarinas and callistemons line many of the creeks. The kapok tree is a feature of the parks rocky landscape and is generally found growing in close proximity to a creek. Its conspicuous yellow waxy flowers bloom from August to October after the tree has shed its leaves.

The diversity of habitats created by the topographic variation, geology and climate is reflected in the parks’ wildlife. Around 440 different animals occur in the park. Birds are particularly diverse with 306 recorded ranging from shorebirds to rainforest species at the southernmost limit of their distribution. Of the fauna recorded eight species are endangered, 14 are vulnerable and one is a near threatened species. Some species are endemic to Mount Elliot, the Mount Elliot nursey-frog Cophixalus mcdonaldi lives only in rainforest between 900 and 1000m above sea level and the nocturnal Mount Elliot broad-tailed gecko Phyllurus Amnicola lives among granite boulders along creek lines between 400 and 1000m above sea level. Request a species list for Bowling Green Bay National Park. Mangroves and the tidal Cocoa Creek, Cape Cleveland section of the national park.

Bowling Green Bay contains examples of the richest coastal habitats typical of north-east Australia's coastal wet-dry tropics. Home to a rich and varied bird life – including migratory birds – the lowland section of Bowling Green Bay National Park is listed under the Ramsar Convention as a wetland of international importance.

Protecting and managing Ramsar sites requires a collaborative effort. Federal, State and local governments work together with natural resource management groups, private industry, First Nation Peoples, landholders and the community to care for the sites and the values they support. This often involves conducting management activities on surrounding areas that impact the Ramsar site and its values.

The Ramsar site is a diverse complex of coastal wetland systems formed on four broad physical geography types including: