We recognise the traditional custodians of the Riversleigh section of the Australian Fossil Mammal sites (lower Gulf region of Queensland)—the Waanyi people, and pay our respects to Elders past, present and emerging.

The Waanyi people know this region as their spiritual and sacred Boodjamulla (Rainbow Serpent) Country and continue to feel a deep sense of responsibility for the safekeeping of this place. The Waanyi people's connection to the landscape is maintained through cultural practice on their traditional homeland—their strong association to this Country was recognised through the determination of Native Title in 2010.

The Australian Fossil Mammal Sites consists of two distinct areas listed as a combined World Heritage property—these are the Riversleigh section, north west of Mount Isa in north Queensland, and the Naracoorte section in South Australia. 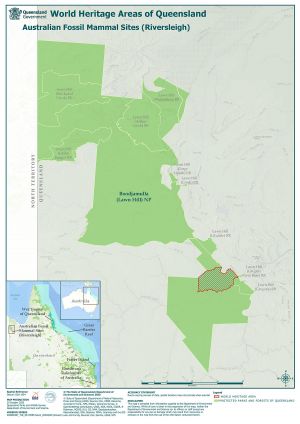 Both Riversleigh and Naracoorte are superb examples of the key stages of evolution of Australia’s unique wildlife and meet two of the ten World Heritage criteria:

The two sites were jointly inscribed on the World Heritage List as the Australian Fossil Mammal Sites (AFMS) in 1994.

First Nations occupation dates back at least 17,000 years and may extend beyond 30,000 years. The Waanyi people know this country as Boodjamulla or the Rainbow Serpent Country. They believe Boodjamulla—the Rainbow Serpent—formed the Lawn Hill Gorge area and created the permanent spring water. Lawn Hill Gorge is a sacred place used only for ceremonial and celebratory purposes. The Waanyi believe that if you tamper with the water, pollute it or take it for granted, the Rainbow Serpent will leave and take all the water with him.

The Waanyi people were hunters and gatherers. Men hunted while the women and children gathered edible plants and fruit. Boomerangs and spears were used for hunting while grass-woven nets were made for catching fish.

During the wet season the Waanyi people would gather under overhanging rocks and in caves, while in the dry months they would camp in paperbark shelters along the creek banks. They made paperbark canoes for travelling short distances and used a shield-shaped wooden dish, called a coolaman, to carry babies, prepare food or to transport fire and food.

Evidence of Aboriginal occupation can still be found today in the remaining mussel middens, grindstone relics and rock art. Waanyi Elders have interpreted some of these sites, providing visitors with an understanding of their traditional lifestyle.

Riversleigh was once a lush rainforest scattered with lime mineral-rich freshwater pools. Some of the world’s most outstanding fossils from the Oligocene period to the Miocene period (10–30 million year ago) have been uncovered at Riversleigh. Visitors can discover the unique story of the evolution of Australia’s wildlife by seeing some of these fossilised animals along the walking track at D Site and reading the track-side illustrated signs that tell stories of past prehistoric mega-fauna. A fossil of a Mekosuchus, a goanna-like crocodile that climbed trees A fossilised crushed skull of a Baru wickeni, a cleaver-headed crocodile.

Palaeontological surveys at Riversleigh have uncovered exceptional examples of the evolution of Australia’s wildlife. Fossil discoveries have revealed a deeper understanding of an ancient and mysterious world where carnivorous kangaroos, predatory pouched lions, giant flightless birds and tree-climbing crocodiles once roamed.

The Barawertornis tedfordi was a huge, cassowary-sized flightless bird. The fossilised vertebra and gizzard stones of an even bigger bird species Dromornis murrayi, affectionately known as ‘Big Bird’, can be seen in a large limestone rock beside the Riversleigh Fossil Trail.

The 5m-long, cleaver-headed Baru wickeni had huge dagger-like teeth and lived around Riversleigh’s freshwater pools about 16-24 million years ago. A fossilised crushed skull of a crocodile can be seen along the Riversleigh Fossil Trail.

Wakaleo oldfieldi was a pouched lion about the size of a German shepherd dog. These tree-climbing carnivores had moon-shaped blades on their premolars used for cutting up the flesh and bone of its prey.

Known as Australia’s killer kangaroo, Ekaltadeta was able to slice through bone as well as muscle, and probably galloped rather than hopped. Ekaltadeta was just one of the strange kinds of kangaroos that lived in Riversleigh’s ancient rainforest. 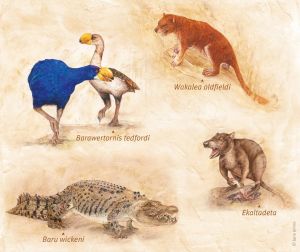 The ancient and mysterious mega-fauna that once roamed Riversleigh

Riversleigh has the richest fossil mammal deposits in Australia and have generously contributed to the world’s knowledge of prehistoric mammal communities.

Riversleigh’s environment has changed dramatically over time and understanding how these changes occurred and their influence on the animals and plants that lived here, will assist in managing this landscape into the future.

Visitors can gain further insight about Riversleigh at the Riversleigh Fossil Discovery Centre in Mount Isa.

Management of the Riversleigh section of the Australian Fossil Mammal Site

Riversleigh has one advisory committee—the Riversleigh World Heritage Advisory Committee (RWHAC). A RWHAC is appointed every three-years with support through the department and funding provided by the Australian Government.

See the Terms of Reference for the Riversleigh World Heritage Advisory Committee .

The Queensland Parks and Wildlife Service is responsible for the day-to-day management of Riversleigh.

If you are interested in joining our mailing list to be informed of future opportunities to be involved in the advisory committees or for any further information, email world.heritage@des.qld.gov.au.

Following each meeting of the Riversleigh World Heritage Advisory Committee, the Chair prepares a communique for the Queensland and Commonwealth Ministers responsible for World Heritage matters. Communiques outline high-level discussions and key recommendations of committees and since 2016, have been published here as soon as they are available: