Have your say on the draft management plan for Boodjamulla National Park. Closes: Midnight on Friday, 18 February 2022.

Lawn Hill Gorge is a beautiful oasis in the outback. Photo credit: © Tourism and Events Queensland 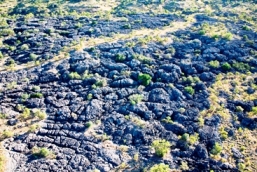 Millions of years in the making

Boodjamulla (Lawn Hill) National Park is one of Queensland's most significant geological parks, with interesting rocks and landscapes spanning hundreds of millions of years.

The red, hard sandstone in the eastern part of the main Lawn Hill Gorge and along the Constance Range was originally a blanket of sand deposited in an ancient shallow sea, about 1560 million years ago. Ripple marks from that ancient seabed are still visible in places in the sandstone today. Life in those Proterozoic times amounted to little more than bacteria and mats of algal-like organisms called stromatolites.

Much later, in Cambrian times (approximately 530 million years ago), another shallow sea formed, lapping up against the old sandstone hills from the south and west. Lime and silica-rich sediments and remains of sponges and trilobites (primitive marine animals with hard shells) accumulated to form layers of limestone. Fish had not yet evolved. These grey limestones containing chert (silica) now occur in upper parts of Lawn Hill Gorge and west of Riversleigh.

Over millions of years the sandstones and limestones have been gradually stripped away by erosion. The Constance Range is gradually being eroded westward by the headwaters of the Gulf streams. Lawn Hill Creek and other similar streams were once at a higher level, but have cut down through the limestone and sandstone along prominent fractures, forming gorges.

In the Riversleigh area, much younger pale-grey limestones, deposited between 25 and 15 million years ago in Tertiary times, lie on top of the older Cambrian limestones. The younger limestone was deposited in small rainforest lakes that flourished in the wetter climate of the time. This limestone has become famous for the innumerable fragments of fossil vertebrate animals it contains. Early relatives of today's fauna fell, or were washed into those lakes, and were preserved for posterity in the lime-rich sediments. Read more about the Riversleigh World Heritage Site.

Water continually alters the Boodjamulla landscape. Where lime-rich water flows over obstructions, such as rocks or vegetation debris, it evaporates and deposit skins of calcite (calcium carbonate). As the calcite is deposited in the creek, plant and animal matter can be trapped and fossilised within it. The calcite forms a porous, brittle rock known as tufa (pronounced ‘tyoohfah’), and, over time, this builds up into fragile formations. Indarri Falls and the Cascades are tufa formations.

An assortment of plant communities

Different plant communities grow throughout the park. Where and how they grow is determined by the rock, soil and moisture in the area.

Sandstone is like a sponge—it has a remarkable ability to hold moisture—while rainwater drains through the more porous limestone. Some plants, such as figs, have developed specialised root systems to gain access to moisture and nutrients deep within rock crevices. Brittle Range gum, native gardenia, turkey bush and grevillea species grow on the sandstone hilltops, while the rocky slopes feature rock figs, emu apples, acacias and spinifex. Open woodlands and grasslands, of Mitchell grass, supplejack, whitewood, western bloodwood and silver-leaf box, extend over the black clay plains. Rock ringtail possums are unusual in that they live amongst rocky outcrops and climb trees only to feed. Ring-tailed dragons can be seen basking on the rocks at the edges of walking tracks.

The gorge is home to animals that live there year-round and others that visit seasonally. It is an important corridor for wildlife movement, particularly migrating birds. The park has similar habitats to those of the Northern Territory’s Top End and forms the extreme eastern limit of the range of animals such as the rock ringtail possum, purple-crowned fairy-wren and sandstone shrike-thrush.

Birdwatching is always rewarding at Boodjamulla. The rare and beautiful purple-crowned fairy-wren can often be seen among the pandanus lining the gorge, along with the buff-sided robin with its distinctive high-pitched call. Waterbirds abound including the great egret, Australian darter, cormorant and the secretive black bittern. Varied lorikeets and red-winged parrots are a stunning sight as they streak overhead. The gorge is one of the few places in Australia where channel-billed cuckoos are found all year round—attracted by the warm winters and bountiful fig supply. In the camping area, listen for the distinctive barking owls calling to one another through the night air.

Olive pythons and ring-tailed dragons are commonly seen along with the ‘arm waving’ Gilbert’s dragon, also aptly known as the ta ta lizard. Common wallaroos (euros) and purple-necked rock wallabies live amongst the escarpments and hills while agile wallabies frequent the river flats.

Lawn Hill Creek provides excellent viewing of freshwater fish and turtles. More than 20 types of fish occur in the creek. The most commonly seen are bony bream, long toms, black striped grunters and sooty grunters. Look out for the vertical spots of the archerfish near the water surface. This fish emits a jet of water to knock insects down on to the water surface. Freshwater crocodiles also occur in the park and are often seen in Lawn Hill Creek.

Two turtles, the northern snapping turtle and Worrell’s short-necked turtle, can be seen amongst the vegetation lining the creek. The gulf snapping turtle, was first described in 1994 from a fossil discovered at Riversleigh. For several years it was thought to be extinct, until a living turtle—matching the fossil—was caught in Lawn Hill Creek. This turtle is Australia’s first living fossil and largest freshwater turtle. 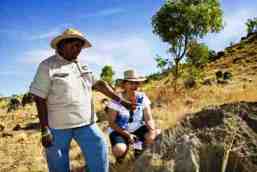 During the wet season, the Waanyi people would gather under overhanging rocks and in caves, while in the dry months they would camp in paperbark shelters along the creek banks. They made paperbark canoes for travelling short distances and used a shield-shaped wooden dish, called a coolaman, to carry babies, prepare food or to transport fire and food.

The Waanyi people were hunters and gatherers. Men hunted while the women and children gathered edible plants. Boomerangs and spears were used for hunting while grass-woven nets were used for catching fish. Boodjamulla country provided plenty of food for the Waanyi people. Their staple diet consisted of fish (wirigatyigatyi), turtle (wabungara), kangaroo (mailadyi), and goanna (dyambapna), and was supplemented with berries, mussels (mulla mulla), pandanus fruit (bulalula), wild banana and cabbage palms cores (wodidy). They used stones to grind lily seeds for damper and used earth ovens (dundee) of hot coals and rocks for cooking.

Evidence of Aboriginal occupation can still be found today in the remaining mussel middens, grindstone relics, and rock art. Waanyi Elders have interpreted some of these sites, providing visitors with an understanding of their traditional lifestyle. Lawn Hill Station was the largest fauna sanctuary on leasehold land in Queensland.

Pastoral pioneers, including Page, Mytton and Cooper, brought the first cattle to the Lawn Hill Creek area in the 1860s. But this was soon followed by an outbreak of 'Gulf Fever' (a type of typhoid fever) that caused many graziers to leave the area. In the mid 1870s, Frank Hann purchased numerous leases launching the beginnings of the South Esk Holdings, which later became the Lawn Hill Riversleigh Pastoral Holding Company. Hann accumulated 9000km2 of land in total.

Over the next century several graziers became leaseholders of the land until the famous 'cattle king' Sebastiao Maia arrived from Brazil. Sebastiao Maia arrived in Sydney in March 1975. He was unable to speak English and employed a Sydney taxi driver to be his interpreter and chauffeur as he travelled the country in search of potential cattle stations. In 1976, Maia took over the lease of Lawn Hill Station that had grown to 11,000km2, and was one of the largest cattle stations in Queensland. In the early days Lawn Hill Station became the largest fauna sanctuary on leasehold land in Queensland. In 1984, Maia surrendered 12,200ha of Lawn Hill Station to the Queensland Government for a national park.