Whiptail wallabies are commonly seen along the Jabali walk. 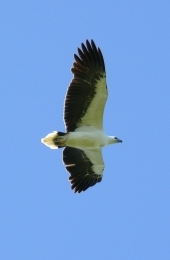 The origins of the Herbert River Gorge and Blencoe Falls are anything but humble. Several major geological events created today’s landscape.

About 50 million years ago, movement of the earth's crust formed the edge of the continent that lies against the Coral Sea and the formation of the present landforms began. An earlier Herbert River flowed towards the west. It is not known when it reached its present east-flowing course.

Continuous erosion caused the Herbert River Falls to retreat by around 40cm every 100 years. As the gorge became longer, tributaries like Blencoe Creek were left suspended. This created waterfalls, such as Blencoe Falls, which in turn eroded their own gorges.

In the creeks and rivers, Krefft’s river turtles Emydura macquarii krefftii can often be seen basking on logs or peering through the surface of the water.

Standing tall and regal, hoop pines Araucaria cunninghamii are a distinctive feature of the landscape around Blencoe Falls. A long time ago, when the world was warmer and wetter and dinosaurs roamed the land, hoop pines were abundant. Despite dramatic changes in the climate they live on today. Sensitive to fire, they have found refuge in protected gorges and on steep slopes and rocky outcrops.

This country is rugged and one of extremes. During the dryer months, the land is parched and vulnerable to fire. Grasses die back and some trees lose their leaves. Large granite outcrops add to the starkness, completing the appearance of a dying landscape. With the arrival of the wet, the countryside is inundated with water and the plants spring back to life.