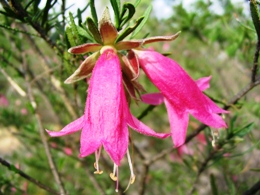 Flowers of crimson turkey bush can be prolific.

The predominant landscapes of Blackwood National Park include rugged hills, gorges, black soil plains and exposed laterite forms with distinctive hard pan areas and limited vegetation. The soils of the area are representative of pebbly quartz sandstones with mudstones dating from the Carboniferous. These landforms were created by an ancient river system flowing north from the Springsure area. Tertiary sandstones (often containing laterite) and Quaternary silts, sands and gravels (including black earths) have been deposited throughout the park.

Blackwood National Park has diverse plant communities representing a cross-section of the western parts of the Brigalow Belt North biogeographic region. Vegetation is mostly acacia and eucalypt forests with native grasses in the understorey. One hundred and thirty plant species have been identified with Acacia armitii listed as near threatened (rare). During the cooler winter months, the vegetation of Blackwood National Park bursts forth in colour as many species flower. Look for the bright pink flowers of crimson turkey bush Eremophila latrobei and the yellows of the many wattle species including brigalow spearwood A. harpophylla and currawong A. sparsiflora.