Be inspired: Camping with your four-legged friend in South East Queensland

Does your dog love new adventures just like you? There’s no need to leave your pooch pining for you at home when there’s long walks, new smells, and plenty of exploring to be had by your four-legged friend. Photo credit: Trevor Hatfield © Queensland Government 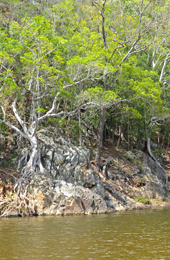 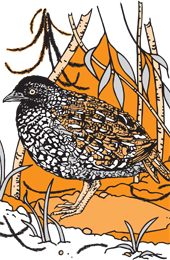 You are more likely to see the feeding scrapes of black-breasted button-quails than the birds themselves. The collared delma has distinctive black and yellow bands across the head and neck.

Impressive hoop pine Araucaria cunninghamii plantations grow side-by-side with a suite of native eucalypt forests, woodlands and rainforest communities. This state forest is managed not just for timber production, but also to protect the habitats of many plants and animals—including some rare and endangered species and others with high regional conservation priority.

Tall open forests of blackbutt Eucalyptus pilularis, tallowwood, stringybarks, and grey gum grow on the volcanic soils of the higher slopes within Benarkin State Forest. Elsewhere ironbarks of several species dominate the forest canopy. Silver-leaved ironbark dominates the open woodland where soils and aspect dictate, and blue gums (forest red gums) are common at lower elevations. Dry rainforest (vine scrub) with a thick, prickly understorey occurs here and there and can be seen invading under tall eucalypt trees. In places, hoop pine and other rainforest emergents can be seen rising above the canopy.

Vine scrub is host to a great diversity of plant and animal life. Green catbirds, paradise riflebirds and noisy pittas are species of significance found locally. Patches of grass adjacent to rainforest are visited at night by red-necked pademelons. Rufous bettongs also emerge from their grassy nests to feed on tubers and fungi under the cover of darkness. Dense vine scrub and thickets of lantana make this a major habitat area for the shy and vulnerable black-breasted button-quail. Dish-shaped scrapes in the dirt are the tell-tale signs that these secretive birds have been searching for food on the forest floor.

Ducks, darters and other waterbirds stay close to the creek while forest birds come intermittently to drink. Watch kingfishers wait patiently on overhanging branches, ready to dive into the water for aquatic life. Honeyeaters feed in bottlebrush Melaleuca viminalis lining the creek while white-throated treecreepers and varied sittellas glean insects from taller trees. Olive-backed orioles and pigeons visit fig trees and other rainforest plants clinging to sheltered gullies. Watch wrens and finches darting about in the undergrowth and lizards, water dragons and freshwater turtles sunning themselves on rocks.

If you are very quiet, you may spot a platypus swimming in the deep pools of Emu Creek at dawn or dusk.

Numerous frogs, skinks and lizards live in the area, including the vulnerable and secretive collared delma (a small legless lizard). Prior to European settlement, the Wakka Wakka and Jinibara peoples lived and moved through the landscape. Careful stewardship maintained a balance between human need and the land.

Approximately every three years, thousands of Aboriginal people travelled from far and near to bunya festivals held in the Bunya Mountains and Blackall Ranges. The festivals coincided with heavy crops of bunya 'nuts', and were times for ceremonies, trading, law-making and settling disputes. People travelled along ancient pathways to these gatherings— almost certainly through the Benarkin area.

This ancient way of life, like the landscape itself, was disrupted and changed by the arrival of Europeans.

The white settlers who arrived after 1889 took up blocks divided from 'Taromeo' and 'Cooyar' pastoral holdings. They were discontented with the thickness of ironbark forests, vine scrubs and pine belts studding their properties. Towering forests fell under the axe to make way for pastures and grazing livestock.

By 1902, an Australia-wide demand for timber was heard and farmers found themselves either sellers or haulers of unsuspected 'wooden wealth'. Comparatively little of what had previously been regarded as a liability was left.

Lars Andersen's sawmill was established at Blackbutt in 1903—the first of many in the district. Within weeks the district's first township sprang up. The Yarraman township came later, following the opening in 1912 of the Queensland Pine Company mill— built to tap into one of the best pine forests in Australia. Arriving at Benarkin and Blackbutt in 1911 and Yarraman in 1913, the railway provided greater access to coastal timber markets.

With the waste of timber in the early days and huge demand during the timber boom, natural stands of timber were severely depleted. Ironically, the first reservations of timbered lands were made near railway lines to provide ready access to supplies of hardwood for railway use. In 1901, at the height of the timber boom, 12,140 hectares of land was reserved near Benarkin¾the first in the district.

Benarkin State Forest was originally regarded as one of the finest ironbark stands in Queensland, but unregulated timber getting and fires escaping frequently from the railway line resulted in the forest becoming cut out, over-burned and weed-infested. By 1920 the Forestry Department began afforestation, regeneration of hardwood and pine stands, and clearing of weeds.

Experiments in Benarkin State Forest determined that hoop pine was the best species to grow in the area and seedling nurseries were started at Benarkin (1920), Blackbutt and Yarraman (1928). The first hoop pine plantations were established in 1925–6 and expanded to comprise 35 percent of the total State hoop pine plantation resource. Plantation thinning became available in 1948 and sales of final crop plantation pine began in 1983. Plantation pine is still milled at Yarraman and Taromeo today.

The peak days of the peak of the timber boom have passed, but the timber industry and numerous state forests and timber reserves dotted throughout the hills remain important features of the district's economic, social, recreational and natural landscape.