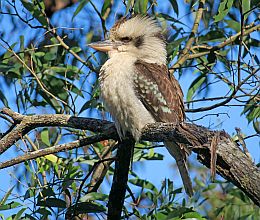 Kookaburras are one of the many birds you will see in the park, especially in the day-use area. Herons are often seen stalking their prey in the mangroves. 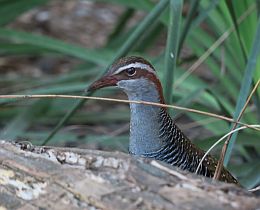 Keep an eye out for rails. These secretive birds are usually found hiding in the vegetation at the water's edge.

“These hills lay but a little way inland, and not far from each other, they are remarkable for the singular form of their elevation, which very much resembles a glasshouse for this reason I called them the Glass Houses…”

This area contains a wide variety of vegetation communities including heathlands, woodlands and forests. Discover more about the plants in this area by reading the 'Ranger field guide: Native plants of Glass House Mountains National Park'. This guide also includes information about plants in the Beerburrum and Beerwah State Forest areas.

This area is home to koalas, goannas, echidnas and grey kangaroos. Many birds such as kookaburras, cockatoos, lorikeets, rosellas and peregrine falcons can also be seen. The glossy black-cockatoo, which is considered vulnerable to extinction, is found in Beerburrum and Beerwah State forests and the Glass House Mountains area.

The Glass House Mountains area was a special meeting place where many Aboriginal people gathered for ceremonies and trading. This place is considered spiritually significant with many ceremonial sites still present and protected today.

Aboriginal people could ‘read’ environmental signs and knew that certain events (such as a tree flowering) heralded another food supply. The people here planned large festivals and gatherings such as bunya nut festivals at times when local food sources were peaking. This way, a crowd of hundreds of people could be catered for with minimal effort. Early missionaries in this area saw gatherings of thousands of people.

During the 1860s, much changed for the Aboriginal people here. Vast areas of timber were felled and burnt to make way for farming and stock. The railway from Caboolture to Landsborough, built in 1890, opened the way for more intensive settlement. As part of the Beerburrum soldier settlement scheme in the early 1900s, ex-servicemen and their families were allocated land and grew pineapples. However, many farms were unsuccessful and farmers turned to the timber industry to survive.

Plantation forests were first established in this area in the 1930s. Learn more about pine plantations that are currently managed by HQPlantations Pty Ltd.