Be inspired: Explore the tropics in ‘the Wet’—our top 3 ‘must dos’

Barron Gorge National Park is within the Wet Tropics World Heritage Area (WTWHA). Proclaimed in 1988, the WTWHA extends for about 450km between Cooktown and Townsville. Consisting of nearly 900,000ha, vegetation is primarily tropical rainforest, but also includes open eucalypt forest, wetlands and mangrove forests. The WTWHA meets all four natural criteria for World Heritage listing. These criteria recognise the area’s exceptional natural beauty and the importance of its biological diversity and evolutionary history, including habitats for numerous threatened species. The WTWHA also has cultural significance for Aboriginal people who have traditional links with the area and its surrounds. The park encompasses a diversity of plant communities stretching from the coastal lowlands to the valleys and mountains on the Atherton Tableland. The area, however, is renowned for its tropical rainforests along with the seasonal rain and mist upon which it depends. Other plant communities in the park include open woodlands, with groves of she-oaks, found on the foothills and upland slopes. Grassland patches grow on the coastal foothills and adjacent to the railway line. Patches of upland heath are restricted to the plateau and peaks. Birds and butterflies are abundant, flying between and within the different vegetation communities. Vibrant rainbow and scaly-breasted lorikeets screech in the treetops. Quieter emerald doves can be seen on the forest floor. The distinctive 'wallock-a-woo' call of the elusive wompoo fruit-dove echoes down from the rainforest canopy. Australian brush-turkeys and orange-footed scrubfowl scratch around on the forest floor. Both birds use leaf litter to build huge nesting mounds. The imposing flightless southern cassowary also inhabits the park, and plays a vital role in distributing the seeds of rainforest trees, by feeding on a variety of rainforest fruits. The brilliant blue Ulysses butterfly and the vivid green of the Cairns birdwing butterfly provide flashes of colour among the trees. Barron Falls in flood is a spectacular sight during the wetter months.

The landscape of Barron Gorge National Park began to form about 400 million years ago under the sea, when Australia was still part of the great super-continent, Gondwana. Ancient rivers carried sediments to the coast, which was then more than 100km west of its present position.

Earth movements at the edge of the continent uplifted and compressed the sandwich of sediments and volcanic rocks, forming the metamorphics—low-grade slates, greywackes and siltstone. Subsequently, the Barron River eroded areas of weakness and a deep gorge was formed. Where the underlying rock was more resistant, the river water tumbled over the sharp edge to form a broken waterfall more than 250m high.

The Djabugandji Bama (Aboriginal people) are the Traditional Owners of the area known as Djirri Nyundu Nyrrumba, which includes Barron Gorge National Park

The Traditional Owners ask that you take care and respect their country during your visit. Find out more about the culture and country of the Djabugay community. 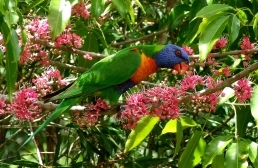 Many species of birds including rainbow lorikeets live in the park. Rainbow stag beetles are one of many kinds of invertebrates found in the rainforest.

Gold rushes in the 1870s drew thousands of prospectors from all over the world to the region. Cairns was founded as a port and the Douglas and Smith tracks were established through Barron Gorge as the first links between the goldfields and the port. Miners even fossicked in Barron Gorge itself—remains of mining shafts and diggings can still be found.

Valuable red cedar, known as 'red gold', was logged in the Barron Gorge in the 1880s and sometimes sent down the river—over the falls! It became obvious that a better means of transport for timber and also minerals, produce and cattle was needed. The Barron Valley was selected as the site for a rail link to the Atherton Tableland. This formidable task was undertaken between 1886 and 1891 by 1500 men in steep, rocky terrain, dense forest and seasonal wet weather conditions. Incredible by today's standards; much of the original construction work was done by hand.

A small hydro-electric station, the first underground power station in Australia, was built in 1935 to harness the immense force of water surging over Barron Falls. It was replaced by the Barron Gorge Hydro-Power Station further down the gorge in 1963 after the construction of the Tinaroo Dam upstream on the Barron River. Only by a release of water or during flood events can tourists today have some idea of the former grandeur of the falls.

From the late 1800s the network of tracks was adopted by gold miners, cattle drovers, timber haulers and railway workers to cater for drays and pack-horses. Evidence of these past users can be seen along the tracks—Aboriginal nut cracking stones, miners' bottle dumps and the remains of shanties and rail workers' camps.