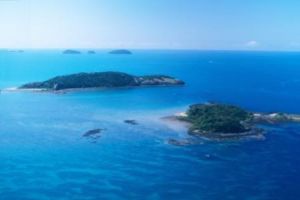 The rocky slopes of the Barnard islands are densely cloaked in rainforest, with diversity increasing with the size of the island. Mangroves fringe parts of the islands and coastal plants border the shores. The South Barnard islands (Sister and Stephens islands) are an important breeding site for seabirds. Six species of terns have been recorded nesting there, mainly in the dense vegetation next to the shore. Twenty-three species of woodland birds have also been recorded on and around the Barnard islands.

The Barnard Island Group National Park is part of the 'sea country' of the Mandubarra Traditional Owners.

In the late 1800s, a bech-de-mer fishing settlement was built on Sisters Island. Six boats and a large Aboriginal workforce occupied the island until the settlement was lost in a cyclone in 1890. A small lighthouse was built on Kent Island in 1897. It was staffed until a cyclone in 1918 forced the evacuation of the lighthouse keeper and his family, after which the lighthouse was automated. Jessie, Bresnahan, Hutchinson, Sisters and Stephens islands have been protected as national park since 1936. Kent and Lindquist islands are Commonwealth islands.

Looking after the park

Our precious Great Barrier Reef World Heritage islands are among the most pest-free islands in the world. They need your help to stay this way. Please Be pest-free! (PDF, 573.6KB) before your visit.

Before you visit, please check that your boat, clothing, footwear and gear are free of soil, seeds, parts of plants, eggs, ants and insects (and their eggs), spiders, lizards, toads, rats and mice.

While you are on the islands, remove soil, weeds, seeds and pests from your boat, gear and clothes before moving to a new site. Wrap seeds and plant material, and place them in your rubbish.

Everyone in Queensland has a General Biosecurity Obligation to minimise the biosecurity risk posed by their activities. This includes the risk of introducing and spreading weeds and pests to island national parks.

See the guidelines on caring for parks for more information about protecting our environment and heritage in parks.

The Barnard Island Group National Park is managed by Queensland Parks and Wildlife Service (QPWS) for the enjoyment of visitors and the conservation of nature.

Kent Island is a Commonwealth island. It is managed in a complementary manner with the national park islands of the Barnard Island Group National Park under agreement with the Great Barrier Reef Marine Park Authority.

For tourism information for all regions in Queensland see Queensland Holidays.