Alwal National Park (Cape York Peninsula Aboriginal Land) (CYPAL) is situated on Cape York Peninsula, about 100km north-west of Laura and 12km west of the Hann River Roadhouse. Escarpments, undulating low hills, seasonal wetlands and patches of vine-thicket are some of the landscapes protected in this national park. The western part of the park includes the upper reaches of the Morehead River, which flows into Rinyirru (Lakefield) National Park (CYPAL). Open forests dominated by paperbarks, and various woodlands comprised mainly of teatrees or eucalypts, contribute to a mosaic of plant communities fringing the river and its tributaries, Waterbag and Lightning creeks.

Endangered golden-shouldered parrots Psephotus chrysopterygius or Alwal live on the gravelly hills and grassy flats of the Morehead River and Waterbag Creek. Not only are these small parrots the namesake of Alwal National Park (CYPAL), they are also one of the symbols of Cape York Peninsula. Turquoise males, with their black crown and bright yellow wings, are most commonly seen sitting on top of their ant bed nests, watching for predators as their mates attend to a large clutch of chicks. Large flocks used to be found widely throughout the peninsula, congregating near waterholes at the end of the dry season. Today, visitors are lucky to catch a glimpse of a few birds at one of their remnant haunts.

Sandstone escarpments and rocky slopes are dominant features of the eastern part of Alwal National Park (CYPAL). Rocky slopes are home to near threatened (rare) Cape York rock-wallabies Petrogale coenensis. These small, shy wallabies bound effortlessly over the rocky surfaces, their short, thickly-padded, spongy feet providing added grip as they spring over the rocks. Their long, cylindrical tails act as rudders allowing them to change direction in mid-air.

An isolated patch of vine scrub found within the park is of regional significance. A number of near threatened (rare) plants such as Homoranthus tropicus and Lepturus xerophilus and the vulnerable Jedda multicaulis can also be found in the area. Jedda multicaulis is a shrub with branched stems coming from a swollen, buried stem. If damaged by fire, grazing or trampling, this plant regrows from underground buds. 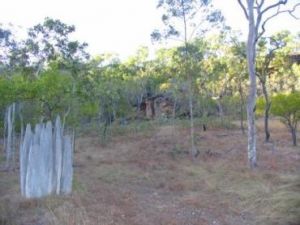 The Traditional Owners of Alwal National Park (CYPAL) are the Olkola Aboriginal people. The area is a cultural landscape rich in history, stories and significant sites.