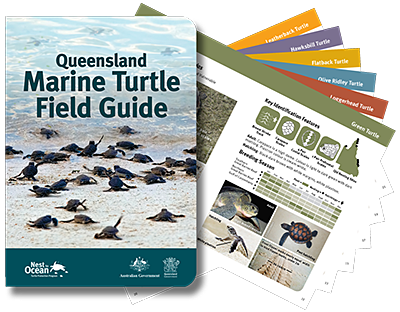 The threat of predation on marine turtle nests and hatchlings is a key concern for the sustainability of turtle populations in coastal Queensland. To address this, marine turtle rookeries along the coast have been identified under the Nest to Ocean Turtle Protection Program (PDF, 1.1MB) for active nest protection and predator control efforts to reduce the threat posed by feral pigs and other predator species.

The Australian and Queensland governments have each committed matching funds of up to $3.5 million over six years until mid-2020 to help reduce the threat of predation on marine turtle nests.

The Queensland Marine Turtle Field Guide has been developed as part of the $7 million Nest to Ocean Turtle Protection Program, jointly funded by the Australian and Queensland governments.

A total of $5.8 million has been committed to a select number of priority projects which will continue until June 2020. Since commencement of the program, more than 20,000 turtle nests have been monitored by Nest to Ocean grant recipients, and the program has consistently achieved greater than 95% nest survival as a result of the predator control activities and direct nest protection. In total, it is estimated that approximately 1.3 million hatchlings have been protected since the inception of the program.