The Queensland Government acknowledges the First Nations peoples of Country throughout Queensland and their continuing connection to land, sea and community, including those places that are recognised as World Heritage sites—places of international importance and recognised as the most remarkable places on Earth.

We pay our respects to all First Nations peoples, cultures and to Elders past, present and emerging.

First Nations peoples are engaged in all levels of governance and management of Queensland’s World Heritage properties including through membership of advisory committees and ‘on Country’ management.

What is a World Heritage area?

World Heritage areas are places that are important to all the peoples of the world, regardless of where they are located. They include the most beautiful and significant places on our planet.

These areas include the Great Barrier Reef, the Pyramids of Giza, Great Wall of China, Machu Pichu, the Galapagos Islands, Grand Canyon, rainforests of Queensland’s Wet Tropics and Tropical Rainforests of Borneo.

There are more than 1,100 World Heritage properties globally.

Australia has 20 sites on the World Heritage list, including:

Why are they important?

The United Nations Educational, Scientific and Cultural Organisation (UNESCO) is the organisation that monitors and considers nominations of all World Heritage areas.

Only the Australian Government can nominate Australian places for entry on this list. UNESCO’s World Heritage Committee assesses nominated places against set criteria and makes the final decision as to the places that are included on the World Heritage List. 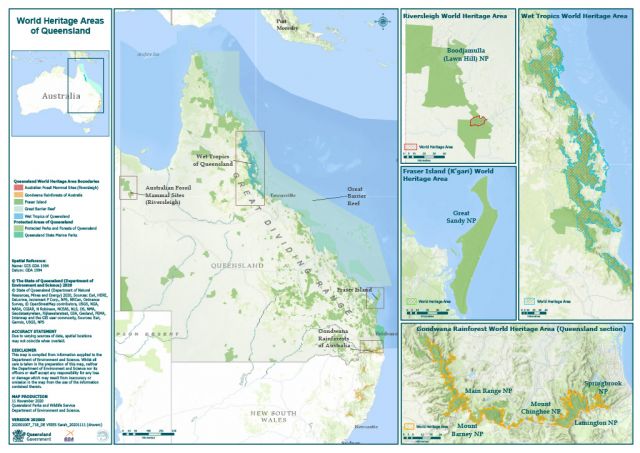 Five of the World’s Heritage listed sites are found in Queensland.