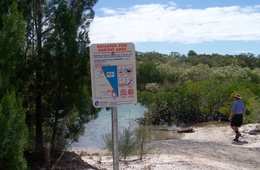 Parts of Coonarr, Theodolite and Lagoon creeks and the foreshore of Hervey Bay between these.